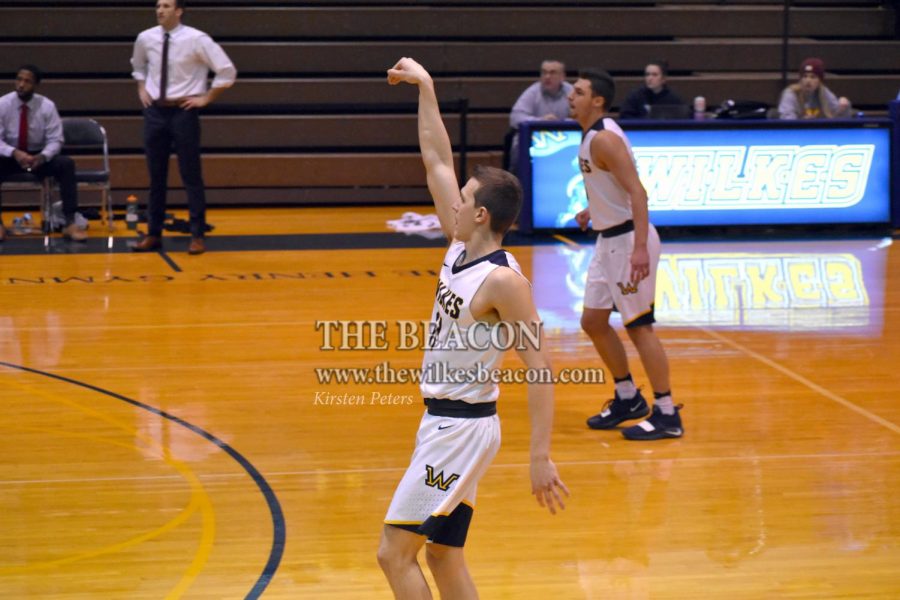 WILKES-BARRE, Pa. — The Colonels men’s basketball team made a statement this past week with wins over Manhattanville College and the MAC Freedom’s top team DeSales University.

Following a 3-1 start in conference play, Wilkes went 1-3 in their next four games, pushing them to the edge of a playoff spot.

The Colonels have seemed to transition smoothly back into the team that found themselves in the top seed in last year’s conference tournament. After starting the season as a high powered offensive team, head coach Izzi Metz has his team back to their defensive identity, and so far they have looked like a dominant team.

“We really haven’t tried to change up anything,” said forward Mark Mullins. “We are just slowing things down and finding the best shot we can on the offensive side. Defensively, we just want to play our best game.”

On Wednesday, the Colonels handled Manhattanville without much trouble, despite a close score for most of the game.

The real test for Metz’s squad came Saturday when they hosted the conference’s top team.

The Bulldogs came out firing, and it looked like they were on their way to an easy road win. They took a 14-2 lead while shooting 100 percent from the field to start the game.

“We know that nobody makes every shot they take,” said guard Marcus Robinson. “We knew that if we kept making them take contested, low percentage shots, we would be able to get some stops and fight back into the game.”

DeSales did cool off, and Wilkes took advantage, as they made some big plays on both sides of the court to get back into the game. One of the matchups the Colonels took advantage of was that between Robinson, one of the conference’s best defenders, and Tracy Simsick, DeSales’ top scorer and the  third leading scorer in the MAC Freedom. Robinson was able to hold Simsick under his season average and to just two points in the first half. For the entire game, Simsick scored nine points while shooting 4-16 from the field and 1-12 from three-point range.

Going into halftime, Wilkes was able to battle back and even the score at 35.

The game continued its back-and-forth pace, as Wilkes jumped out to a 41-35 lead early in the second half with DeSales always having an answer. The Colonels spent a majority of the half leading, but the Bulldogs found a way to go up by one or two points.

Tommy Bowen and Mullins took over the paint in the second half for Wilkes, as Bowen finished the game with 17 points and Mullins added 20. Even with help though, it was Robinson who proved to be a difference-maker, as the senior put the team on his back on both sides of the floor. On top of being tasked with shutting down one of the conference’s top scorers, Robinson also scored 22 points to lead his team. Robinson sparked his team with an electrifying dunk attempt that went in and out of the rim, but he redeemed himself right after, as he went to the rim again and floated one in, plus drawing a foul for the three-point play.

“I knew I should’ve had the first dunk,” Robinson said. “I wanted to get it right after but I saw that I could draw the foul and I took the three-point play.”

Wilkes was carried by Robinson’s energy, and they took a four-point lead going into the final 1:30 in the game.

Both teams exchanged baskets, and DeSales brought the game within two points in the final 20 seconds. Robinson had the ball for Wilkes and instead of trying to foul him, the Bulldogs went for the trap. Robinson, knowing he had to get the ball out of his team’s back court, threw a desperation pass over the middle that was grabbed by the Bulldogs.

“I had a million thoughts going through my head,” Robinson said. “We came back to the bench and knew we needed to get a stop and it was time to make a play.”

The play was the lone blemish for an almost perfect game for Robinson.

DeSales came out of the timeout trailing by one with seven seconds on the clock. They inbounded to their point guard Matt Kachelries, who was one of their leading scorers for the game. He danced past a Colonel defender and drove to the rim. Wilkes forced him to throw the ball outside to Ben Pratt, who was 0-3 from the field and 0-2 from behind the three-point arc. His last second attempt bounced off the rim and Wilkes’ bench stormed the court.

Wilkes has to build on their two wins, as they are set to play local rivals Misericordia and King’s. Misericordia currently sits one game behind the Colonels for the fourth and final playoff spot.