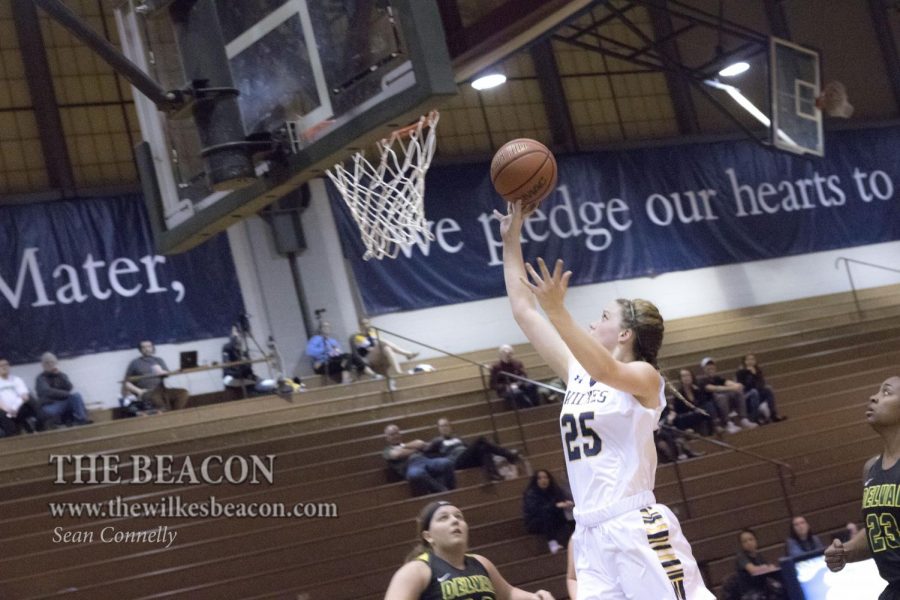 Senior forward Ashley Caster sinks a two-point shot and the and-one from the line after being fouled to stretch the Colonels lead to 24-12 in the second quarter.

After struggling last season, the Wilkes women’s basketball team has seemed to turn their program around this season.

Under the leadership of former head coach Chris Heery, the Colonels failed to attain a single conference victory and went 4-21 overall. Despite wanting to succeed, last year’s program found themselves on the losing end.

However, with the introduction of former Marywood University head coach Tara Macciocco into the Colonels leadership position, the women’s basketball program has been seeing a positive turn-around.

Currently, Wilkes has an overall record of 7-11 and a conference record of 3-5. With at least seven games left in the season, the Colonels hope to keep improving and enhance their stat sheet.

As for some of their game play, the Colonels faced Delaware Valley University on Wednesday night, securing a 56-45 conference victory on their home court.

“We wanted to push the tempo and try to score in transition,” said Macciocco, noting the mindset she instilled into her players prior to the game. “Defensively, we wanted to make sure we were closing out hard on their shooters.”

In the first quarter, Wilkes dominated and set the tone for the rest of the game, outscoring Delaware Valley 17-6. Junior center Gianna Roberts and junior guard Alyssa Alfano proved to be key for the Colonels success, as they each tacked on five points to the home side of the scoreboard.

As for the Aggies, Lauren Moretti and Amber Grohowski were the sole two players responsible for Delaware Valley’s meek six points.

On both sides of the court, foul shots played an important role in gaining ground, as the Aggies committed five fouls in the first quarter that allowed the Colonels to capitalize on their opponent’s aggressive game play.

However, the Aggies were not the only side committing fouls, as the Colonels gave up 14 points of Delaware Valley’s 45 to shots made at the free throw line.

In the second quarter, the Colonels maintained their lead. However, this did not go without challenge, as the Aggies gained some momentum with back-to-back shots from beyond the arc to jump start their 11-point quarter.

Despite the momentum-booster for Delaware Valley, the Colonels remained in control. The Aggies aggressive game-play proved to be a downfall once again, as Wilkes’ senior forward Ashley Caster sank a two-point shot and the and-one from the line to reassert the Colonels dominance following Delaware Valley’s impressive three-point shots. Caster’s three-point play stretched the Colonels lead to double their opponent’s, 24-12, with 6:09 remaining in the half.

With the shift in momentum back in the Colonels favor, the scoring began to cool down for the rest of the quarter. Sophomore forward Gabby Smicherko finalized Wilkes’ offensive efforts for the half with a three-pointer that kept the Colonels in the lead 27-17 going into the second half.

“When the whole team is on-board with the game plan, that is when we have success,” said sophomore guard Maddie Kelley, who led the Colonels offense with 12 points. “This was a huge component in our win over Del Val.”

Kelley’s message to follow the game plan was reinforced during halftime, as the Colonels decided to adjust their approach to accommodate the strategy of their opponent.

After realizing some of the challenges Wilkes faced in the first half, Macciocco decided to remind her players of some of the small, but crucial, elements of the game.

“Delaware Valley trapped us a bit early on, so we talked about taking care of the ball more and making sure that someone was always stepping up with their hands high calling for the extra pass,” said Macciocco.

This approach proved to be successful for the Colonels, as they scored 29 points in the second half to solidify their victory.

However, the victory did not come easy for Wilkes, as the Aggies continued their resilient nature, tacking on 28 points of their own in the second half to just about match the Colonels point-for-point.

In the third quarter, Kelley was the lone Colonel to score more than two points, using a jump shot to push Wilkes’ lead to 16 points only three minutes into the quarter.

Senior guard Gab Giordano followed suit, sinking two free throws at the 4:14 mark to stretch the Colonels to their largest lead of the night, 39-19.

“A lot of our success has to do with how hard we work,” said Giordano, who achieved a double-double with 10 points and 14 rebounds in the contest. “Coming into every game, we know that we’re an underdog and that we have to out-work everyone we play for us to be successful.”

Despite Giordano’s ability to get the Colonels to a 20-point lead, it did not last for long, as the Aggies shifted gears once again, going on an 11-0 run to gain control of the game.

Sarah Willis and Danielle Skedzielewski contributed nine points combined of Delaware Valley’s 13 points for the quarter, challenging Wilkes’ defense to get within nine points of the lead heading into the fourth quarter.

Despite improving upon their pace since returning from the winter intersession, Macciocco noted that the Colonels haven’t found their defensive rhythm as easily.

“We have tried a few different strategies this season to figure out what works best for us,” said Macciocco. “The defensive end is where I think we still need to get better and improve, both individually and as a team. My teams have always been known to be tough and out-work their opponents, and that strategy will never change.”

In the fourth quarter, the Aggies continued to try for a comeback victory. An Emily Kutskel two-pointer got the Aggies within seven points of the lead on their first possession of the quarter.

However, the Aggies comeback came up short, as the Colonels reinforced their presence on the court. With just over eight minutes remaining, Kelley secured the field goal from downtown, giving Wilkes a double-digit lead once again, 44-32.

The Aggies were able to reduce their loss to a nine-point deficit, fittingly finishing off the game at the free throw line with Morgan Culbreath sinking her two foul shots, leaving the Colonels victorious 56-45.

As for the Colonels success, both Giordano and Kelley echoed similar sentiments.

“Everyone on the team has really bought-in to what Coach Macc and Coach Lindsay are teaching us,” said Giordano. “Our coaches put us in a really good position to be successful.”

Kelley reiterated Giordano’s remarks, emphasizing how “buying-in” to their coach’s style of play and “adapting to discipline” are key to their approach on the court, part of which allowed them to be successful against Delaware Valley.

Both Giordano’s and Kelley’s remarks do not seem far off from the ideals that Macciocco is working to instill, as Macciocco’s remarks herself bare a resemblance to that of her players.

“The team is starting to buy-in and I’m really looking forward to building on some of the successes that we have had this season and learning from our failures,” said Macciocco.

However, since transitioning from coaching at Marywood University for 14 seasons, Macciocco has noted some of the adjustments that come with coaching a young team again.

“I was at Marywood for 14 seasons, so I consistently had players in the program that would help the newcomers learn my system,” explained Macciocco. “This season has been a different challenge in terms of having to teach an entirely new system, get buy-in from all the players and help everyone understand expectations.”

Since their victory against Delaware Valley, the Colonels traveled to Eastern University for another conference matchup on Saturday, Jan. 26. Despite the confidence boost from their most recent victory, Wilkes fell 82-68.

The Colonels are set to take on Manhattanville College in their next home conference matchup on Wednesday, Jan. 30 at 6:00 p.m.

As the Colonels continue into the thick of conference play, Macciocco noted Wilkes’ approach for the rest of the season, stating, “Just continue to control the controllables and get better every game.”