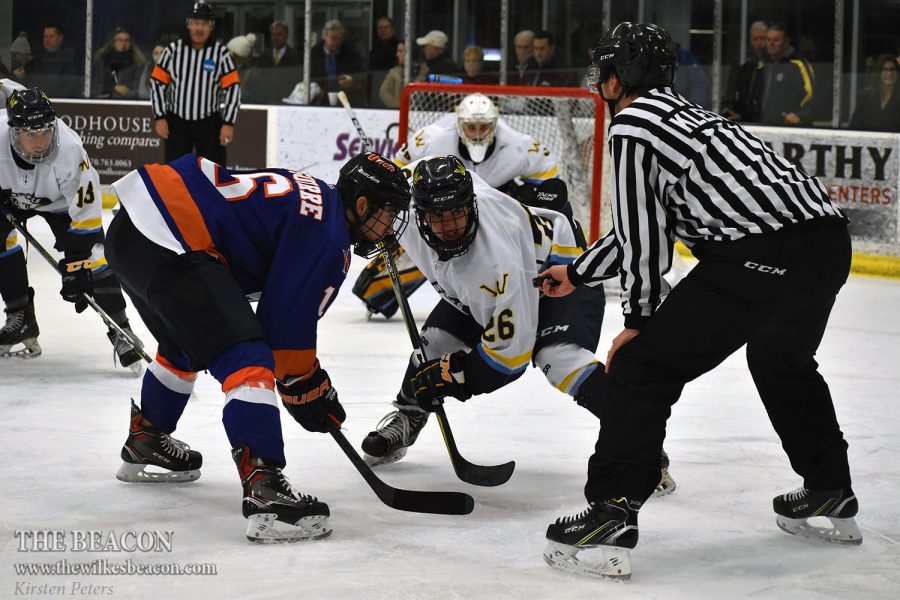 Wilkes fell to Utica College in the final four seconds of play on Dec. 7, but tied with Elmira College on Jan. 21 to secure their first place standing in the United Collegiate Hockey Conference (UCHC) over second-place Utica.

WILKES-BARRE, Pa. — As many Wilkes University students are just getting back into the grind after the four week winter intersession, the men’s ice hockey team got a head start, coming back early to compete during the break.

Before the break, the Colonels entered into a two-game home stretch on back-to-back days, both of which proved to be important UCHC matchups. Prior to the home games on Dec. 7 and 8, the Colonels had a 6-3 record overall and a 5-1 record in UCHC conference play.

In the first of their back-to-back contests, Wilkes fell 2-1 to Utica College on Dec. 7.

Late in the third period, forward Tyler Barrow scored the lone goal for Wilkes, tying the game 1-1. Although this sparked a momentum change for the Colonels, it unfortunately came too late into the game, as Utica was able to bury the puck into an empty net with seconds remaining.

“I think, obviously, Utica got the best of us this time,” said forward Donald Flynn, using few words to describe the game.

Despite the loss on the previous day, Wilkes was able to bounce back in a memorable game at Mohegan Sun Arena, defeating Nazareth College 3-2.

Like a majority of the Colonels games played this season, their contest against Nazareth was a comeback victory. Forward Devon Schell secured the Colonels win with a late short-handed goal.

Despite their “shaky” beginning, Wilkes ultimately came out with the victory, improving their record to 7-4 overall and 6-2 in the UCHC.

After taking some time off from competition during finals week, the Colonels returned to the Toyota Sportsplex for a non-conference matchup against Bryn Athyn College on Dec. 19.

The Colonels appeared to be shaky again at the beginning of the Bryn Athyn game, allowing the Lions several golden opportunities to an early lead. However, the penalty kill, which has been highly praised all season, proved to be crucial to keeping the game scoreless.

With a lot of back-and-forth in the first two periods, the Colonels and the Lions traded goals, allowing the game to be tied 2-2 going into the third period.

At 1:20 into the third period, forward Angelo Marquart’s first career goal broke the tie and gave the Colonels a lead they wouldn’t give up for the remainder of the game. Wilkes proved to dominate for the entirety of the third period, with defenseman Michael Gurska solidifying an empty net goal to lead the Colonels to their 4-2 victory.

Following the contest, Coach Riley and the team took some well-deserved rest.

Riley emphasized the importance of taking a break for the players, as Barrow noted some of Riley’s sentiments.

“Definitely take some time with your family and take some time off. But also do the little things, either stuff on the ice or in the weight room. The most important thing is to stay on task,” said Barrow.

After the winter intersession, Wilkes returned to action in 2019 with a trip to Post University in Connecticut on Jan. 5.

The road trip proved to be successful, as the Colonels attained a 3-1 victory with goals by Tyson Araujo, Barrow and Marquart. Despite trailing early in the second period, the Colonels’ resiliency proved to outmatch Post’s, tallying three goals in the second and third periods to beat the Eagles.

After returning to Wilkes-Barre, the Colonels made their way back to the Toyota Sportsplex for a non-conference matchup against Anna Maria College on Saturday, Jan. 12.

The slow start put the Colonels behind 1-0 early in the contest, however, Wilkes’ theme of responding and finding a way to win games held true in this contest yet again.

Schell scored the first goal for the Colonels, tying the game 1-1 before a lot of back-and-forth action ensued with most of the goals for the day being scored on the power play for both teams.

Anna Maria would only score one more goal, taking the 2-1 lead before the goal-hungry Colonels scored four goals in the final ten minutes of the second and third periods. Araujo kicked off the scoring for Wilkes, tying the game 2-2. Forward Wade Novak and Flynn were responsible for the final three goals of the game, propelling Wilkes to a 5-2 victory.

By the time everyone else returned to campus, the men’s ice hockey team had improved their record to 10-4 overall and 6-2 in the UCHC.

Since the start of spring classes, Wilkes has played three important UCHC games, two of which were against Lebanon Valley and followed suit with the rest of their season by being come-from-behind wins for the Colonels.

The third, and most recent, game the Colonels played proved to be imperative for Wilkes’ standings, as they tied 4-4 with Elmira College on Jan. 21.

The UCHC currently has the first-year Colonels in first place with 26 points.

Wilkes and Utica will meet again in mid-February for an important contest.

Although it seems that the game against Utica will be a deciding factor for the Colonels as far as UCHC play goes, Wilkes is approaching the rest of their competition with the same mentality they’ve had all season.

“To be honest, we’re just taking it one game at a time. We’re not trying to look too far ahead on the schedule,” said Flynn.

Wilkes will compete against crosstown rival King’s College at the Toyota Sportsplex on Jan. 31 at 7:15 p.m.