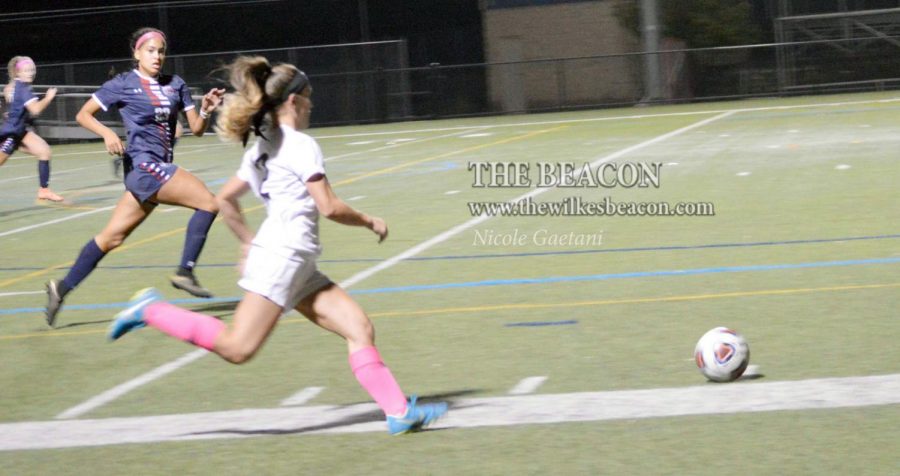 Senior Nicolette Towlen races down the sideline with the ball during the MAC Freedom semifinal game.

At the beginning of the game, DeSales controlled the ball for almost the entire start, displaying their dominance for the first seven minutes.

However, the Colonels were quickly able to gain control of the game after getting  possession of the ball and getting the first goal of the night.

Junior Haley Evans began the rush for the Colonels by streaking down the sideline, attempting to center the ball. The ball was redirected by freshman Emily Bidelspach,  eventually making its way to Towlen who buried the ball in the back of the net.

“We knew what we had to do to get it done and we were all really goal hungry,” Towlen said. “So, we got in the box and just got it done.”

The first goal of the night by Towlen sparked a momentum for the Colonels, as they dominated several aspects of the game.

Shortly after the first goal from Towlen, Bidelspach had another opportunity, as she found herself with a clear shot to score. However, she was unable to extend the Colonels lead by two, sending the ball over the crossbar after a pass from Towlen.

Ten minutes after the first goal, the Colonels were knocking on the door again. This time, the Colonel corner proved costly to DeSales.

Junior Jessica Egan perfectly delivered the corner to the middle of the field and Bracchi headed the ball beyond Haley Jacobs, the goalkeeper for DeSales.

“The corner came from the left side of the keeper,” Bracchi said. “I just wanted to get to the ball and score for our team to get the next game.”

The Colonels remained persistent and did not take their foot off the gas for the next twenty minutes of play.

After substituting several starters out of the game late in the first half, DeSales seized the opportunity and cut their two-goal deficit to one.

The corner kick proved to be an important aspect of the game for both teams, as DeSales capitalized on a corner kick of their own with five minutes left in the first half, putting DeSales on the board and tightening the contest between the two teams.

For DeSales, Natalie Dorsheimer kicked the corner right to Gabby Torchia, who was able to head the ball past  Wilkes’s junior goalkeeper Samantha Cecere. Although DeSales scored, Cecere made a diving attempt to keep the game scoreless.

The Colonels would not allow any more goals in the remaining minutes of the first half of play, leading DeSales 2-1 going into halftime.

The physicality of both teams showed in the second half of the game, as both teams embraced playoff soccer.

Bidelspach looked to extend the lead for the Colonels when she found herself streaking down the side, but the Bulldogs’ Jacobs covered the ball before Bidelspach was able to get a shot away.

The Colonels struggled in the second half to keep DeSales out of their zone, but they did not allow the Bulldogs to score.

In the final fifteen minutes of the game, the Colonels took charge and were able to limit the chances for DeSales and finish out the game with the win.

The Colonels controlled the game with several minutes left and kept possession until the clock hit zero.

This win propels the Colonels to the MAC Freedom final against Misericordia.

Even more importantly, first-year head coach John McNichol has taken the Colonels back to the MAC Freedom final against Misericordia.

“It’s really exciting,” said McNichol. “It’s really all about the energy and effort the girls put in. It’s been a tough year with injuries and adversity, and we’ve just battled.”

“Tonight was no different,” elaborated McNichol. “We got up early and played really well early. They had a great goal off that corner, momentum swung and the girls did a great job. It’s very special, being my first year, I mean what the girls have been through and what they’ve done, I couldn’t be more proud of them and the energy they’ve had all year.”