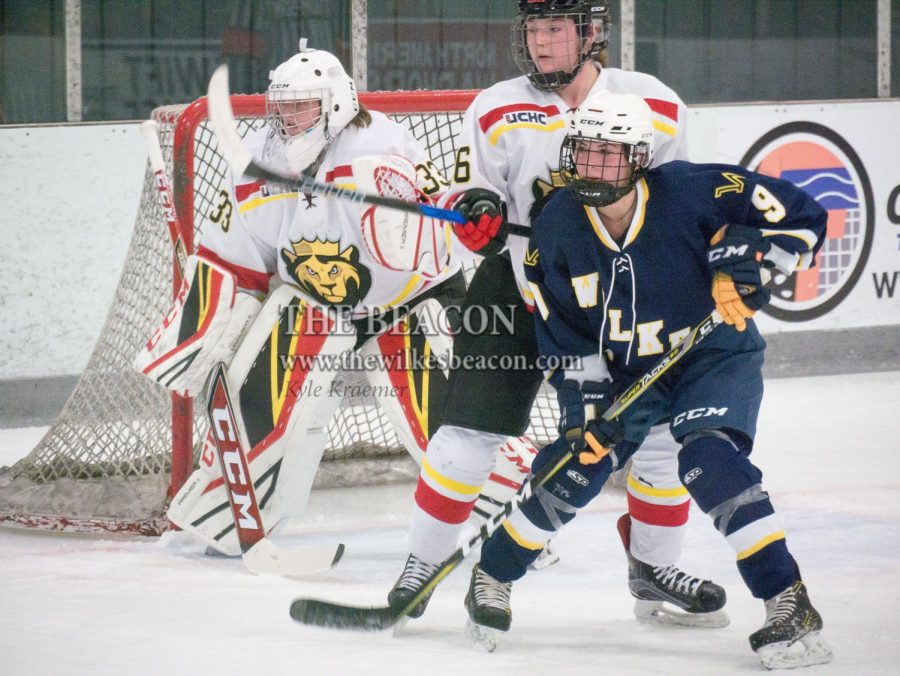 Kendall Castro parks herself by the net hoping to put home a potential rebound.

Wilkes fell in its first ever contest to King’s College, 3-1.

The Colonels came right out of the gates and played with a lot of speed and intensity. Although several opportunities presented were not enough for Wilkes to get the puck by the Monarchs netminder Kiva Sierra Stoltz.

Momentum would swing to the Monarchs after two penalties were taken by Laurenne Fraser, shortly after each other.

The second power play for the Monarchs was successful, as Margaret Gould was able to find the back of the net and gave the Monarchs the early lead in the game.

The Monarchs held their one goal lead for the rest of the first period and through the entire second period as well.

Wilkes was unable to capitalize on several power play opportunities, which they had in the first and second period.

The Monarchs and Colonels battled back and forth for the rest of the first and second period with great hockey being played.

Freshman goalie Ally Joly was able to make over 10 saves, and only let up one goal before freshman Alexa Rango took over the goalie position.

“The good thing about our team is that we have a lot of foot speed, so a lot of the saves were from either the outside or even the breakaways down the middle,” said Joly, reflecting on some of the goals she made. “We caught up to them so the saves weren’t too hard…”

The score in the second period remained 1-0 in favor of the Monarchs.

The third period brought about several more goals. The Monarchs started the goal-scoring in the third period, as Raeann Clancey was able to get an unassisted goal to put the Monarchs up 2-0 over the Colonels.

Wilkes would not go away easy in this contest, as freshman forward Kendall Castro scored the first ever women’s ice hockey goal for Wilkes University. Castro got a pass right in front of the Monarchs goalie (Stoltz) from freshman forward Ashley Murry along the right wing, allowing Castro to find the back of net.

“The first goal was like everyone’s goal, to just find the back of the net and put the puck in the back of the net,” said Castro, after scoring the first women’s goal for Wilkes ever. “We’ve been working on that all through practice these past weeks and finally I got to finish it off and get that goal, which is really exciting for us all, obviously.”

This gave the Colonels a nice momentum boost, as they now only trailed by one goal with 10 minutes remaining in the third period.

The Monarchs retaliated shortly after Castro’s goal, as Kellie Munro put the game out of reach for the Colonels, increasing the lead for King’s by two goals.

In the final five minutes of the game, the Colonels were unable to pull off a miracle comeback and fell short of the Monarchs three goals in their opening game.

Despite the loss, Wilkes head coach Earl Utter kept a positive attitude about what he took away from the game, stating,  “Smiles – we’ve got a team that works very, very hard. Honestly, I think we outworked King’s tonight. The score may not be indicative of our performance, but in all intents and purposes, I think that game for us is a win.”

Wilkes only had six skaters total, that being two goalies and one player who was not in uniform.

King’s College and Wilkes University were both teams who had never won an ice hockey contest before this matchup.

Despite losing their first game, the Colonels enjoyed the experience of finally playing in their first hockey game on the ice.

Joly stated, “Just the experience overall, just being here, playing Division III hockey, this is just one of the most fun times I’ve had playing hockey, so just the whole experience about it.”

With this loss 3-1 loss to King’s, the Colonels start their season at 0-1.

“It just takes a lot to work together, be a team, and communicate. We can’t get frustrated with each other at all – it just doesn’t help. But being a small team, it just brings us together, we’re a small family so we’re just working up to it, hoping to get our other player back on the ice soon and just having a great time,” said Castro.

Wilkes is back in action Friday at 5 p.m. when the host Nazareth College at the Toyota Sports Complex.