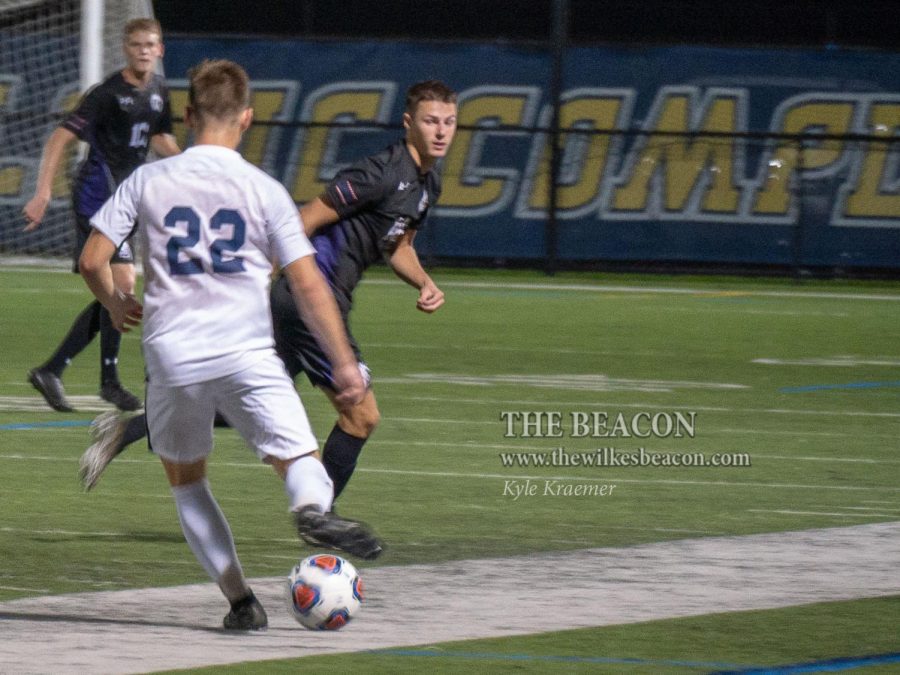 Hunter Maxwell looks to push the ball forward while running the point of the Colonels' attack during a Sept. 26 game against the University of Scranton.

EDWARDSVILLE, Pa– The Wilkes University Colonels failed to comeback in the second half against Misericordia as they lost 3-0.

The Colonels started out looking like a faster team and possessing the ball for the first part of the game. Misericordia quickly got their feet underneath them and Charles Gugel found the back of the net for the Cougars with eighteen minutes and twenty-one seconds left into the first half.

Misericordia kept their feet on the gas as the continued apply pressure on Stephen Johnson, the Colonel goalkeeper. Johnson did everything in his power to keep the ball out and his team in the game but Jared Houser of Misericordia beat Johnson on his own rebound to put the Cougars up 2-0.

The Colonels started to pick things up as they knew there was a large mountain to climb to get back into the game. Kyle Bentz of Wilkes almost found the answer they needed as he took a pass from freshman Gabriel Nieves for  breakaway. Bentz took his shot but he pushed it just wide of the net, and the Colonel threat quickly passed.

The score remained 2-0 going into halftime.

“We needed to communicate more, play with a high intensity and press them more,” Senior Captain Camry Huff said. “We needed to just be all around better.”

Wilkes started the second half strong and they saw a quick result. Huff capitalized on a great feed from Jeremy Eager-Hefner to cut the lead down to 2-1.

Wilkes continued to press as they looked like a brand new team on the field. They generated offense and continued to work themselves into the game.

Misericordia, trying to escape some of the colonels pressure sent the ball down to Johnson in the Colonel goal. Johnson fumbled with the ball and Nick Szczerba of Misericordia sprinted down the field to bury the easy goal.

With the score 3-1 and just under 20 minutes left, the Colonels found themselves back to where they started. The wind had left their sails and the Cougars were able to cruise to a 3-1 win.

“We needed to focus more,” Colonel head coach Michael Piranian said. “We need to realize how we should be playing, what we need to look at and how we need to contest.”

The game started heating up between some of the Cougars players as time continued to wind down as three Cougars picked up yellow cards, two of them going to Vincenzo Diliberti, giving him a red card and an ejection.

“Our first rule as a team is to control our tongue. Misericordia, whether it was right wrong, had some language issues,” Piranian said. “It’s a focus of ours to control ourselves.

The Colonels sat at 2-3 in the MAC Freedom and go into their final two conference games needing to win to advance to the conference tournament.

Saturday the Colonels fell 3-1 in a conference game to Manhattanville. Their MAC freedom record is now 2-4.