FH: Colonels give up three unanswered goals in 3-1 loss 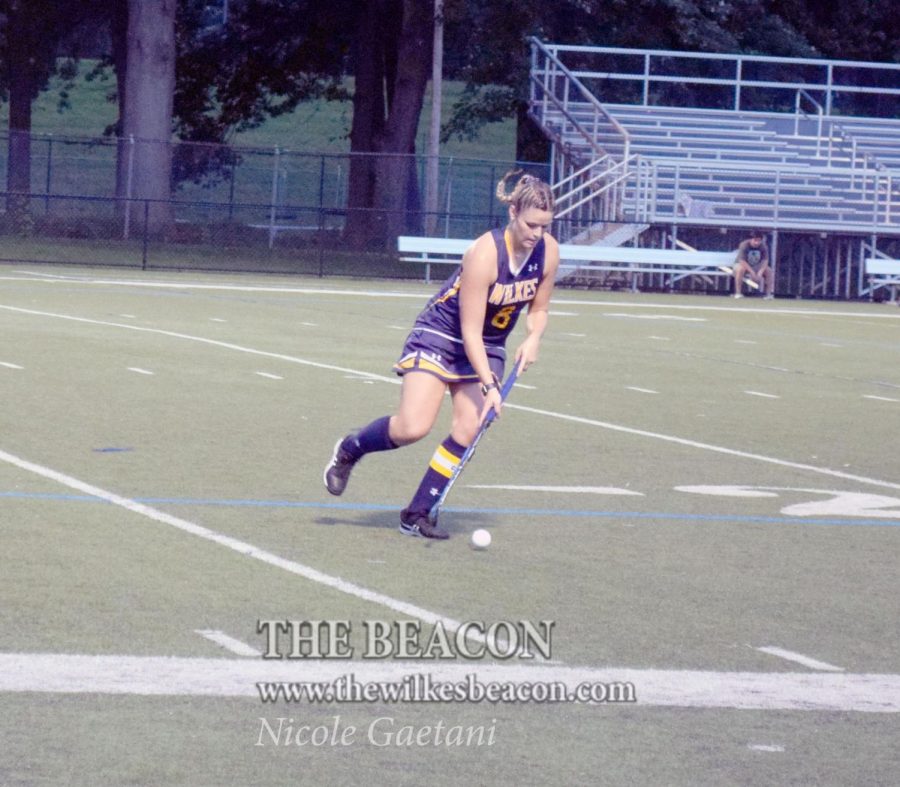 Senior Haley Gayoski scans the field as she looks to kick start the Colonels attack.

EDWARDSVILLE, Pa— Wilkes University Colonels field hockey was back in action on Tuesday night, as they faced off against the Scranton University Royals at Schmidt Stadium. The Colonels were not able to answer Scranton’s three goal run in the second half as they came up short 3-1.

The Colonels stand at a 5-4 record after losing this non-conference matchup.

The first half of play showcased a lot of back and forth action, as there was several scoring opportunities for both teams.

The first opportunity for the Colonels first came twenty minutes into action. Maddie Kelley was looking for her fourth goal on the season, when she sent a shot towards the net, but was denied twice by the Scranton goalkeeper Claire McAllister.

Amber Grohowski also had a late opportunity with the scramble in front of the net, but once again the McAllister stood strong and made three saves, preventing the Colonels from burying the rebound.

This run for the Colonels would not last too long, as Scranton was able to get their fair share of scoring opportunities in the first half of play as well.

Even with the all of the scoring chances for both sides, neither team was able to find the back of the net.

In the first half, the Royals had six shots, to the Colonels three. Dallas Kendra had four saves for Wilkes while McAllister had two. Scranton also had five penalty corners, as the Colonels had just three.

Coming out of halftime, the Colonels started off on the right track. Just two minutes in, the Colonels broke the ice as Grohowski got a deflection from Kelley, and was able to put the Colonels on top.

This scoring chance developed from a penalty corner given to the Colonels, and Haley Gayoski who got the pass and was able to take the shot before two Colonels got deflections to score.

With this, Grohowski tallied her second goal of the season.

This 1-0 lead for the Colonels would not last long as a barrage of shots and goals minutes later by the Royals would stun the Colonels.

The first goal for Scranton came from a penalty corner just a few minutes after the Colonels broke the tie, and the Royals were able to capitalize on this opportunity. Nicolette Keale took advantage of the costly penalty by the Colonels and tied the game 1-1.

A little over a minute later Scranton would strike again, this time an unassisted goal from a quick burst of speed by Megan Gallagher. Gallagher was able to beat the Colonels defense with her speed and sent a shot on goal that Kendra was unable to stop.

The third goal for the Royals was once again contributed from Keale, as she made a precise pass to Elizabeth Tolley who was able to finish off the scoring run for Scranton.

As the Colonels attempted to regroup as a team from this sudden two goal deficit they almost found a way to bring themselves back into the contest with great effort from Mackenzie Sweeney.

Sweeney almost certainly had a goal for the Colonels until a Royal defender made a great defensive play and prevented the ball from crossing the line.

The Colonels and Scranton went back and forth after this attempt with just over 20 minutes remaining, but the Colonels were unable to come back from the two goal deficit.

Despite the inability to come back, some of the Colonel faithful were still positive about the outcome of the game.

“I think they did a great job as they always do,” said Moustafa Almeky, an avid follower of the Colonels field hockey team. “They finished hard though and I think they have a very tough team.”

Looking ahead for the Colonels field hockey team, they look to rebound from this loss this Wednesday, Oct. 5 on the road in Elizabethtown. After that, they take on Fairleigh Dickinson University on Friday night in MAC Freedom play a Schmidt Stadium for senior night.