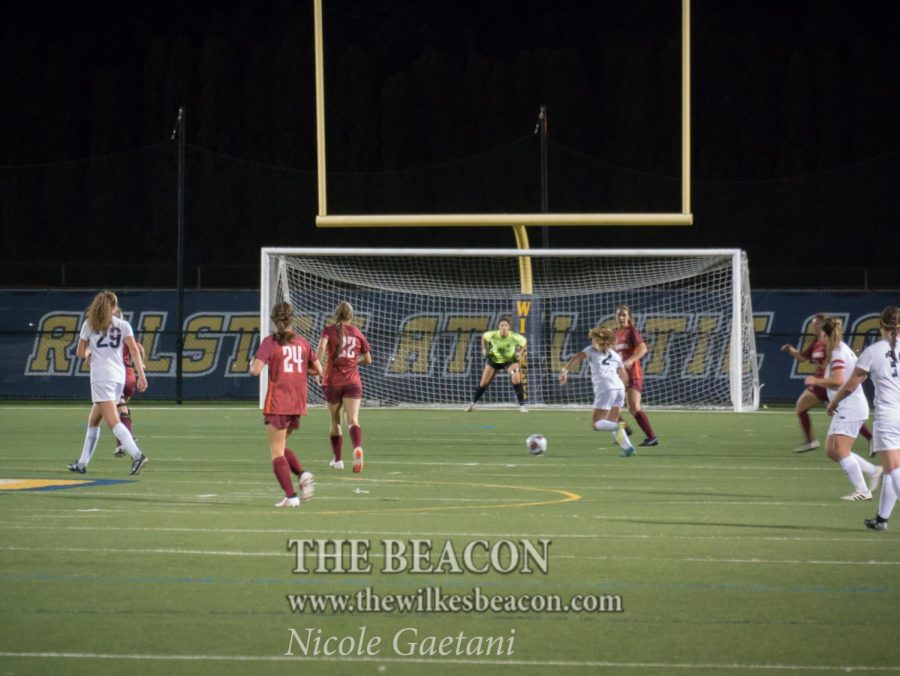 Senior Nicolette Towlen attempts to work the ball toward a good scoring area for the Colonels in their 1-0 loss Wednesday night.

Early on in the game, it was clear to see that Susquehanna was a faster team. The Colonels head coach John McNichol and company came up with a solid game plan to try and create offensive opportunities with a lot of passes towards the perimeter to open up the slot.

Wilkes created a couple of good opportunities early on when freshman Karyna Vargas found herself with an opportunity inside the box. Unfortunately for the Colonels, her shot was grabbed out of mid-air by River Hawks goalie Madison Welliver.

After a strong start for the Colonels, Susquehanna found their rhythm and used their speed to take control of the rest of the half. The first half concluded in a tied with a 6-4 shot advantage in favor of the River Hawks. The first half also saw the refs set the tone for this game, showing that they were going to let each team get away with a fair amount, as each team was only called for one foul and neither side had a corner kick with the way the first half was played.

After Susquehanna flexed their muscles in the first half, the Colonels came out determined to do the same. Wilkes came out of halftime like they were shot out of a gun. Emily Wirth had an opportunity in front of the net, but her shot was blocked and gave the Colonels the first corner kick of the game. Jessica Egan sent the corner kick to the middle of the field, setting up Haley Evans with a great opportunity, however, her shot attempt was blocked and the River Hawks stopped the Colonel attack. The Colonels continued to put the pressure on and the best opportunity to score came when J. Egan sent another corner kick in at the end of the 64th minute. Catherine Gregoire headed Egan’s corner towards the goal but Susquehanna’s Samantha Chillis made a defensive save to prevent Gregoire’s header from finding the back of the net.

The River Hawks immediately started the other way, sending the ball towards the Colonels’ end. Anna Werner sent a shot off the cross-bar for Susquehanna, which later resulted in a Colonel foul inside the box. The officials signalled for a penalty kick, allowing Emily Sullivan to line up and send the ball past Samantha Cecere.

Following the penalty kick, the game continued to get more physical and the intensity picked up. Players continued to use their bodies to gain leverage and try to move the ball. The Colonels continued to press, trying desperately to tie the game up.

The penalty kick would stand as the game’s only goal though, leaving the Colonels disappointed after a tough battle.

“It was an exciting game to be a part of. Both teams played well,” said Colonels team captain Aislinn Speranza. “It was a shame that it came down to a penalty kick decision.”

The Colonels next game is Saturday, Sept. 22 against number 14 ranked Arcadia, then they take on the University of Scranton Wednesday. The Colonels will look to right the ship and get their record back over the .500 mark heading into conference play.

“We have a competitive schedule this week that will help prepare us for success in conference play,” said Speranza. “Wednesday’s game was another building block for us to get where we want to be.”