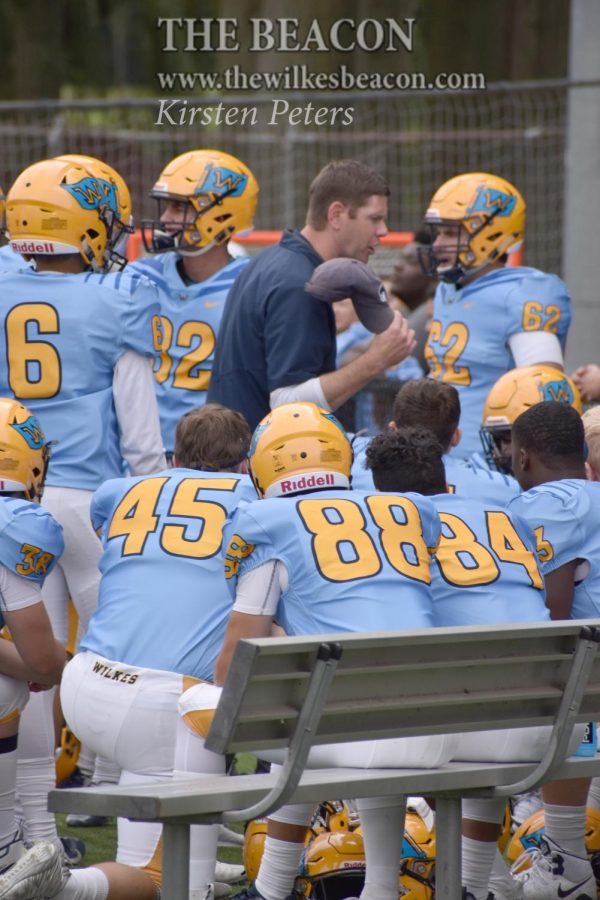 Coach Drach gives instruction on the sidelines after not executing a play against Misericordia.

Classes are well in session this fall and that means one thing – Colonel football is back. During the football team’s offseason, several changes were made to their roster and coaching staff.

The big story for the Colonels this past offseason was the change of their head coach. Jonathan Drach, the new heach coach, came to the helm this year determined to make a difference and get the Colonels back on track with a winning team.

With this change, came a variety of responses from the team. For junior linebacker Bud Moyer, the team has a different feel with a new head coach and way of doing things.

“The biggest change to Wilkes football this year is the new culture the coaching staff has brought with them; they demand the best out of each and everyone of us in everything we do. From practice, the weightroom and academics, you can really see that reflected in our preparation throughout the week and then on the field on Saturdays,” said Moyer.

With the changes to the coaching staff, it is no surprise that there are changes happening on the field, as the team put in a lot of hard work this past spring and during the summer offseason. This hard work is paying off on the football field, as the Colonels clinched their first win of the season 30-27 on the road against Lebanon Valley College in overtime.

During the offseason, the players noted how managing the hard work with classes was difficult. But, with the season underway, the Colonels are starting to show that the hard work is paying off, as junior lineman Mike Osayi detailed their rigorous practice schedule.

“Well, the spring ball practices started at five thirty in the morning, so it was an adjustment to wake up early and start the day off on the right foot,” said Osayi.

In addition to this, the Colonels needed to learn the new plays and different coaching style that Drach would implement, making the spring practices imperative for their success.

Although the Colonels are not having a winning season yet, they are making significant improvements. They have a great deal of potential to win every game, but have seemed to come up short in a few of these contests.

For Moyer, one of the biggest things the Colonels have to work on is closing out and finishing close games.

“One thing we need to improve on is winning every close game. We have proved to everyone now that we can hang with any team you put in front us, but the next step for us is closing out and winning the games every time,” said Moyer.

Overcoming these struggles is a long process and certainly easier said than done. Miscues and mistakes are always a possibility, as well as mental mistakes that are always liable to occur for almost any player.

These several areas, unfortunately, have been tough for the Colonels to overcome.

Despite this struggle, the season the Colonels are having so far has provided an electric atmosphere at Schmidt Stadium for the fans, as well as on the sideline for the Colonels, creating a closeness and togetherness amongst all the players.

This has been one of the biggest strengths for the Colonels this year, as Osayi notes, “The team is playing better than ever before as a whole. During practices and in the weightroom, Coach Drach keeps us together and keeps us focused.”

For the most part, the Colonels have been relatively close to winning, which is due largely in part to the team’s commitment to work together and pick each other up.

The players camaraderie coupled with the commitment of the coaches has formed a unified, tight knit attitude between the coaches and their players.

“We talk a lot with our coaches, whether it be in meetings or in study hall. Sometimes they joke around in meetings and we spend a lot of time with them in study halls as well,” said Osayi.

For Osayi, it’s the little things that allow the coaches and players to bond, such as getting to know the coaches on a personal level.

With dominating performances from junior quarterback Jose Tabora and wide receiver Jeff Steeber, the Colonels have been displaying the excitement from the players.

Tabora has had several standout performances, earning him the MAC player of the week honor.

So far for the season, not including this weekend’s matchup against Misericordia, Tabora has had over 700 passing yards and six touchdowns in three games.

Running the ball for the Colonels has not been one of their strengths, as Tabora has rushed the ball himself more than the actual running backs. To this point, Tabora has 202 yards rushing and one touchdown on the ground this season, making the team reliant on the arm of Tabora.

Running the ball is one area where the Colonels look to improve, which is why Drach definitely has motivated the running backs to make more plays.

Looking ahead for the Colonels, they will face Alvernia on Saturday at 1:00 p.m. in Reading, Pa. in a MAC matchup.

“Each opponent we face is going to be very tough, considering the MAC this year is extremely competitive and any team can beat one another every week,” said Moyer. “There are teams right now who weren’t projected to do that well sitting at the top of the conference, and I think the MAC is going to start to be a free for all for the title from now on instead of the usual two or three teams every year competing at the top. As a player and a fan, I’m really excited.”

Moyer elaborated on this, noting that the Colonels have one common goal, which is to win the MAC. However, to do this, it will not be easy for the Colonels. They will more than likely have to win out the rest of the season to have a chance.

The Colonels are currently 1-3 with the rest of their season opponents being MAC teams.

Drach and his Colonel football team are more than ready to take on their opponents and unleash their full potential.