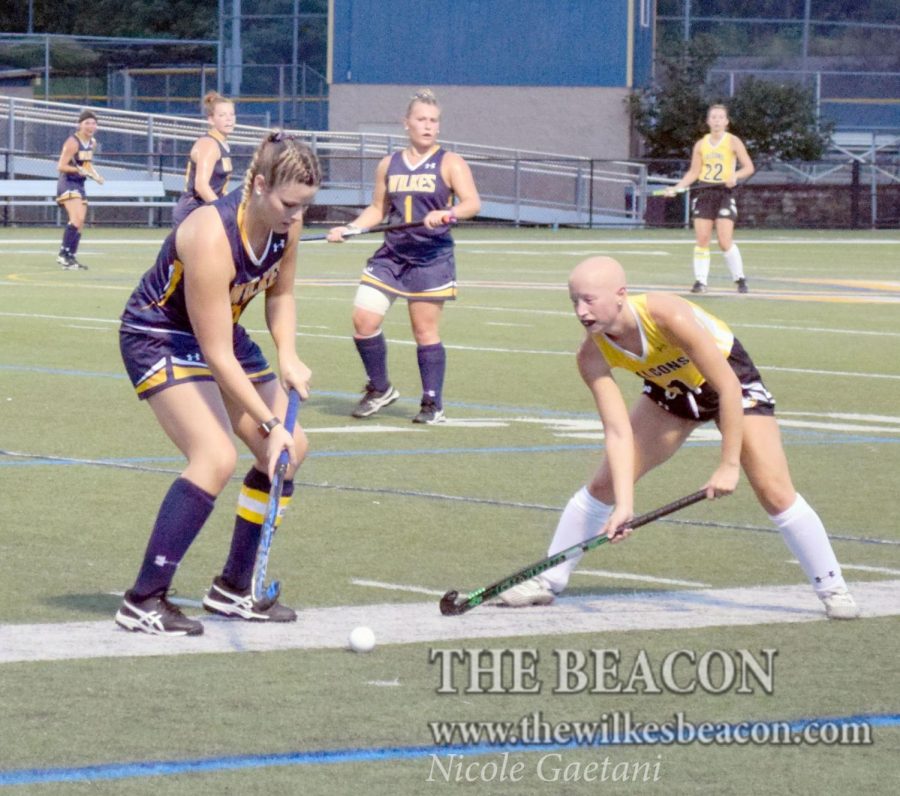 Haley Gayoski scored her second goal of the season with just under two minutes remaining in the first half.

The Colonels fell behind early in this contest 1-0, only seven minutes into play, with a goal scored by Cedar Crest freshman Deserea Dayton.

This would only fuel the Colonels momentum, as they regrouped from this early deficit and proved to be more resilient between the two teams.

After the Cedar Crest goal, the Colonels dominated the pace of play and controlled the ball in the defensive zone for a majority of the first half of play. This pressure against Cedar Crest was thanks to experience from seasoned players, as well as some of their younger talents in midfield and on offense.

“I think they all stepped up, especially the ones that get into the game, but I think they all really have made a big improvement since preseason,” said Gayoski about the underclassmen entering the game.

The Colonels had many opportunities to score, especially with several corner chances in the first half. But Cedar Crest goalie Cassandra Reijgers was blocking shots and acted as a brick wall that the Colonels could not seem to penetrate.

In the 26th minute of play, Kelley scored the first goal for the Colonels with help from Kayla Gronkowski, who earned an assist on the play. This was Kelley’s second goal so far this season.

After this, the goal scoring seemed to be contagious for the Colonels, as they took advantage of another opportunity in the first half of play, coming from their constant offensive pressure against the Cedar Crest defense.

Gayoski put the Colonels ahead 2-1 with just over a minute to spare in the first half, gaining her second goal of the season.

The second half proved to be similar to the first half of play, where the Colonels yet again displayed a greater will to win the battle.

This determination and effort that carried over into the second half paid off for the Colonels in the 48th minute of play, as sophomore forward Dunn got her first goal of the season. This put the Colonels ahead 3-1.

The scoring barrage for the Colonels ended after this point, but Cedar Crest was unable to score a goal in the second half, leaving them in a two-goal deficit until the clock hit zero.

The Colonels improved their record to 3-2 coming off of this victory.

Reflecting on the win, head coach Sara Myers said, “I think that from tonight’s game we learned to encourage each other to fight hard for 70 minutes. We took control in the second half, but we shouldn’t be in that situation in the first place, so we just need to take advantage of every opportunity to play hard for 70 minutes.”

More importantly, Myers earned her 100th career win Thursday night. This accomplishment electrified the Colonel faithful and the entire field hockey team, as the team presented the head coach with flowers and a cake to celebrate her accomplishment.

“It’s emotional for me, I feel like when I think about 100 wins, two things come to mind – the first thing are my players, and all of the wonderful players that I have had the opportunity to coach, and the second thing is our staff because I have the best and most hardworking staff that I enjoy working with every day, so it’s emotional and exciting for the program,” said Myers after her accomplishment.

Thursday night’s victory and achievement for the Colonels field hockey team was a confidence boost, and exactly what the Colonels needed coming off a tough 5-4 loss against Widener in a shootout.

“I think there was definitely a difference in heart and intensity; it was a really big loss and I think we really stepped up our game after that,” said Gayoski. “We definitely worked on our team passing and scoring, and a big win like this with our coaches 100th win, makes us all want to work together to get a win.”

Looking ahead for the Colonels, they will be on the road this Wednesday, Sept. 19 to face Alvernia in Reading, Pa.

The Colonels will return home to face Eastern University this Saturday, Sept. 22 at Schmidt Stadium for their first MAC Freedom contest.