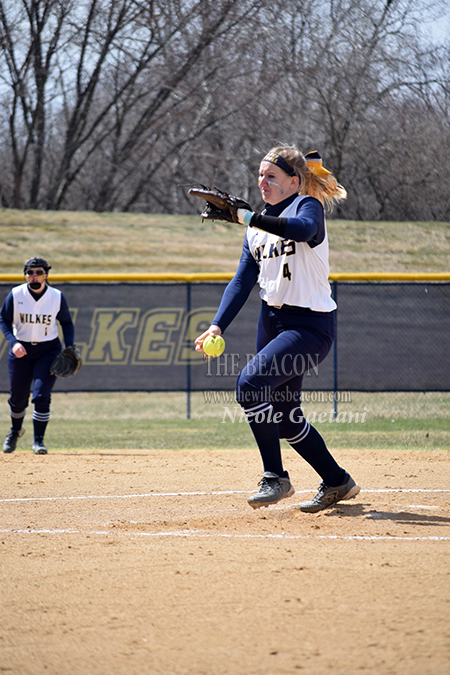 The Lady Colonels came into this rivalry matchup winners of eight of their last nine, sporting an impressive 13-5 (3-1) record. The Lady Monarchs came in losers of three of their last four after getting swept by Albright on Thursday. Their record entering the day was 12-8 (1-3).

In game one, the Colonels sent sophomore Gracen Staunton (7-1 2.13 era) to the circle, while the Monarchs threw senior Samantha Bloom (5-4 4.42 era). Staunton is the Colonels clear cut ace and proved it as she went out and showed it with a stellar performance. Staunton went the full seven innings, allowing just one run on seven hits and one walk. Staunton looked dominant controlling the Lady Monarch lineup.

“She was hitting her spots. If you look at the box score, she did not get behind anyone and she didn’t throw a lot of balls,” Lady Colonels head coach Sarah Leavenworth (Maulorico) said. “When Gracen is doing that, that is when she is at her best.”

The scoring started in the second inning when King’s sophomore shortstop Mackenzie Yori drove in sophomore Taylor Norris. That would be all for the Lady Monarchs in game one as the Colonels took over, getting on the board in the bottom of the fourth when junior Caitlin Brown drove in freshman Britny Jumalon. Junior Haley Welker followed with an opposite field two-run home run to right field. That was all Staunton needed as she shut the door on game one and the Lady Colonels won 4-1.

Game two saw sophomore Celine Podlesney (4-5 3.16 era) and sophomore Kristina Kocher (4-2 4.45 era) toe the rubber for their respective teams. Wilkes was looking to build off of game one and use the momentum from their win in game one to get things going in game two. The game started looking like a pitcher’s duel through the first two innings.

Both were perfect until the top of the third, when freshman Gabby Leary hit her first career home run. Podlesney took care of the next two batters, retiring eight of her first nine from the game, but then gave up three straight extra base hits and a single which put Wilkes down 4-0. Leavenworth had seen enough, and swapped her senior first basemen Christina Gambino into the circle. Gambino got the out she needed, but the Lady Colonels continued to struggle with the bats as they waited until the bottom of the fifth to get there first hit when Gamino doubled off of Kocher.

Kocher stranded the pinch runner freshman Alexis Kessler and the score remained the same until the top of the sixth when the Lady Monarchs scratched their fifth run across.

After a scoreless bottom half of the sixth, King’s came up to the plate ready to swing as the top of their order started things off. Wilkes allowed 13 Lady Monarchs to bat and 9 runs to cross between four errors and nine hits allowed by three different pitchers.

The Lady Colonels tried to stop the bleeding by putting sophomore Erika Gerace in for Gambino, but once things didn’t work out, Leavenworth decided to put Podlesney back into the circle to just try and end the disastrous inning.

A plus for Wilkes in game two was that Welker hit her second home run of the day and third on the year in the bottom of the seventh, spoiling Kocher’s shutout bid.

“If you look at the power in the bottom of our lineup, it’s insane. The bulk of our home runs come from the six, seven and eight spots,” said Leavenworth. “We are lucky that we do not have a traditional lineup where the bottom half is weak, and (Welker) helped prove that today.”

Welker’s home run was a two run shot to dead center, finally getting the Lady Colonels on the scoreboard but it was too little too late. Kocher finished the shortly after, helping the Lady Monarchs pick up the 14-2 win, earning the split.

Wilkes still uses the split to improve their record to 14-6 (4-2) which is good enough for second in the MAC Freedom standings behind DeSales 9-9 (6-2). The Lady Colonels will be back in action with two road doubleheaders Tuesday and Thursday against non-conference opponents in Keystone College and Lycoming College. MAC Freedom play resumes Saturday at Manhattanville.