3-on-3: Champions need “if” game in charity basketball tournament 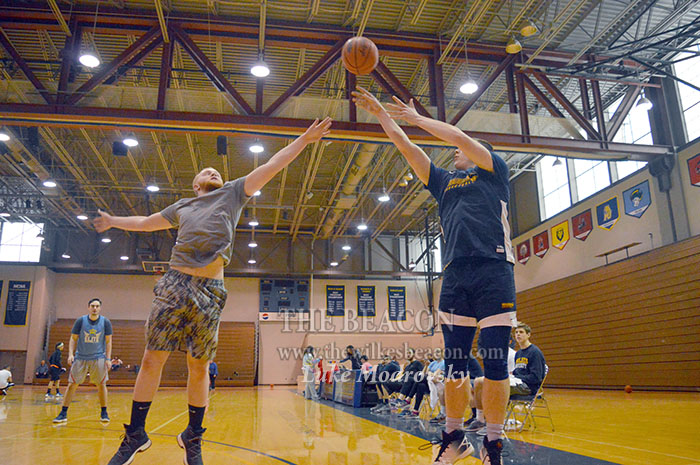 WILKES-BARRE — Team Ball So Hard was faced with adversity in the first annual 3-on-3 basketball tournament hosted by Supporting Autism and Families Everywhere (SAFE).

Trailing 19-14 in the winner bracket final, Wilkes senior Mason Gross tried lift his team to victory, as a win would put Team Ball So Hard directly in the final.

Gross cut the lead to one with an and-one free throw, but it would be Juan Delarosa of Hazleton to end the game, sending Team 3-Point Shooters to the finals.

And did they ever.

After being defeated 21-17 just an hour ago, Team Ball So Hard took both championship games, including the “if” game to claim the tournament title.

Championship game number one featured a closer affair, but Team Ball So Hard would never trail. Gross scored a game-high of 10 field goals to force a final and deciding game.

In the second contest, a Gross layup gave his team a quick 1-0 lead, but a Angel Lopez shot from outside the arc took it away just as fast giving Team 3-Point Shooters a 2-1 lead.

Tournament rules counted regular two-point as one point and shots from beyond the three-point line as two.

Back-to-back scores by Wilkes junior Zach Walser gave Team Ball So Hard a lead they would never look back from, as they rolled to a 21-9 victory.

Garrison carries playing experience from NAIA Division II Spring Arbor in Michigan. She added a pair of shots from beyond the arc in both championship games, as well as several key shots in the team’s win in the winner bracket final.

The Michigan product is a social worker locally, as well as an assistant coach on local high school G.A.R.

All the proceeds from the event were raised for SAFE. The organization to use the money to aid the local Autism community through things like art classes, swimming lessons, and many other activities.

Lindsay Dragon, organizer of the event, is a mother of two who has a close tie to Autism as her oldest son, 4-year-old Jackson, is diagnosed with a severe form of the disease.

“I have a degree but it feels like I’m back at school,” said Dragon when discussing what it is like having to take care of her oldest son, “he changes the way we see life.”

With Jackson being Lindsay’s motivation for having this event, how it all came into fruition was unique as well.

Dragon notes that when it comes to having events to help out families whose children have autism, it is often difficult to get the whole family involved.

“Basketball is a great way to get the younger generation involved,” said Dragon.

The younger generation was certainly involved as members Wilkes men’s basketball, women’s basketball, field hockey, football, men’s soccer, men’s volleyball and women’s volleyball were all represented. They volunteered for the event in various roles, such as participating in the actual tournament, working the concession stand as well as selling event t-shirts and theme basket tickets.