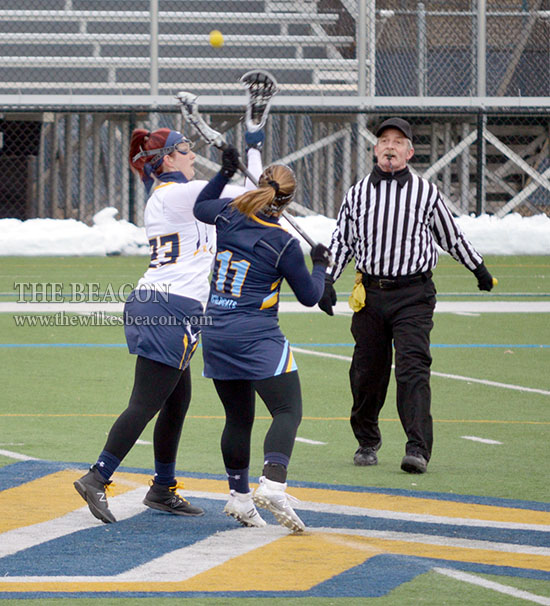 The Lady Colonels struck back against Cazenovia College this past Tuesday at our own Ralston Athletic Complex located in Edwardsville, giving Cazenovia their first “L” in the loss column. Head coach Kammie Towey credits the accomplishment to great field vision and seeing the open man.

“We played cohesively and really meshed well on the field,” Towey said.

With this triumph, Wilkes Women’s lacrosse diced a four game losing streak and are on their way, diving further into their season, continuing to work hard everyday.

Laying out everything the team had, women’s’ lacrosse was able to take three more shots and have fewer turnovers, overall, to hike up the score 19-11 when the final horn of the game sounded throughout the stands and the field.

Wilkes outscored Cazenovia in both halves of the competition. Creating a visual that motivation and determination was consistent throughout the game. Coach Towey added, “They had some incredible shots on goal, found the back of the net, and assisted each other.”

After Cazenovia scored early in the first half, Wilkes stayed relentless, not allowing the Cazenovia Wildcats to dig them into a hole too deep to come out of; the Colonels tied the score back up not too long after that.

Keeping their momentum, Wilkes was able to take the lead when Kyra Boccio scored for the second time in the first few minutes.

Sierra Duman attacked with no mercy, also scoring twice, making the score 4-1 at that point in time. She soon was able to score another goal, accomplishing a hat trick, along with Burkhardt, who was  also able to get three goals added to the Wilkes side of the scoreboard at Schmidt Stadium.

Displaying great teamwork and selflessness, many of the players were given the opportunity to do their part and contribute to the win.

The Wildcats were able to get a goal here and there, but nothing to compare to the amount that the Lady Colonels were able to slam past the opposing goalie. They topped off with a scoring streak of five goals without interruption by Jessyca Held, who had multiple assists, pitching in with the phenomenal win.

“I think Jessy’s senior leadership really showed on offense and the freshman followed her direction on the field,” leading the team to success, said Towey.

In goal, Sarah Carlini had 13 saves, helping out tremendously on defense, keeping it a low scoring game for Cazenovia College.

Coach Towey mentioned, Kylie Bedwell, as being an amazing leader and directing the defense, getting the ball back to the offense when it was needed.

“We’re building upon each game figuring out what we need to do to be more consistent and working well together as a unit for the full 60 minutes,” said Coach Towey.

Working hard and working together is setting the tone for the Wilkes Women’s  Lacrosse team this season, setting high hopes for conference play.