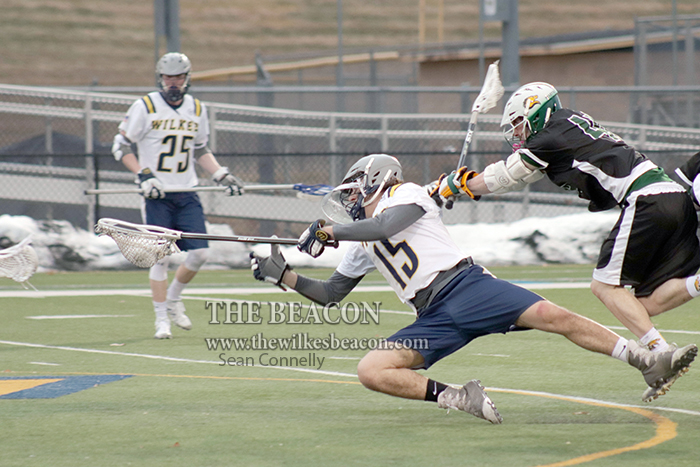 In their second game on the season, the Colonel Men’s Lacrosse team never held a lead, as their second half comeback fell short in what ended up being a 12-7 defeat by the hands of the visiting Marywood University Pacers.

With Marywood holding a 1-0 lead early in the first quarter, sophomore attacker John Luna assisted by senior attacker Jeremy Kachel, found the back of the net with 12:24 remaining in the 2nd quarter. You could certainly see the chemistry Kachel and Luna have as the attackers for the Colonels on that play. Junior John Wink is also another key attacker for the Colonels as they look to build on their chemistry throughout the season.

The Colonels would then end up surrendering two straight goals to start the second quarter, but then were able to answer back with a goal of their own as freshman attacker/midfielder Nico Lorenzo found the back of the net with 13:21 left in the first half, assisted by Luna. The Colonels would then trail by only one.

Three minutes later, after another goal was scored by Marywood, junior Matthew Bush was able to put the Colonels back within one score of the Pacers, as he scored off an assist from junior JT Weitzel.

The Colonels were able to keep Marywood scoreless for almost a solid five minutes, but then the Pacers looked almost unstoppable as they rattled off seven straight goals starting at the 5:49 mark in the 2nd quarter, to make it 11-3 with 1:47 left in the 3rd quarter.

The Colonels just really weren’t able to execute on defense, as they just couldn’t put a stop to the Marywood attack. Marywood’s attack was led by senior Matt Casto with three goals, sophomore Zach Vaughn and senior Rob Maini, each with two goals.

The faceoffs in the contest were one positive to take away in the loss, as sophomore Evan Stolicker, the Colonel’s main player on the face-off, controlled 14 of the 23 faceoffs he faced. Stolicker proved he could be a huge asset to the team on faceoffs with this stat line, allowing for the Colonels to be able to get to work on offense and try getting something going.

“We certainly have some great weapons in the face-off,” Jaques stated.

Kachel, assisted by Luna, was able to find the back of the net once again to make the score 11-4 with 1:29 left in the 3rd quarter. But then only two minutes later, the Pacers made it a seven point game again, as Maini scored his second goal of the game.

The Colonels then sparked a mini comeback attempt in the final quarter as they got within five points with 9:17 remaining in the game. Kachel was a part of two more Colonel goals in the three goals that they scored from 11:37 to 9:17. He assisted on goals by Luna, his second of the game, and Wink, his first goal of the game, with 10:07 remaining. The other goal was scored by senior midfielder Nicholas Ruggiero which went unassisted.

The Colonels were able to keep the Pacers scoreless in the final nine minutes of the game.However, they themselves, were held scoreless as well, as their comeback attempt fell five goals short as the final was 12-7.

Both teams finished the day with 31 shots total, with 14 shots coming on goal for Wilkes. The Colonels were also able to convert 11-of-18 clears to go along with 46 ground balls to Marywood’s 19-of-27 on clears and 36 ground balls.

The Colonels will look to continue improving day in and day out as they prepare for the rest of the season. They will also look to keep games closer and come out with close-game victories.

“This is all preparing us for a great season and rest of conference play,” Jacques said. “We expect to be in one, two goal games this year.”

The Colonels definitely will look to improve on the defensive side of the ball, and try to limit the damage on shots and shots-on-goal.