The Beacon: Female Athlete of the Week 2/5 - 2/11 Why Catey McFadden was selected: Catey McFadden had a team-high 13 points in a loss against Miscericordia on Feb. 10. Congratulations, Catey! 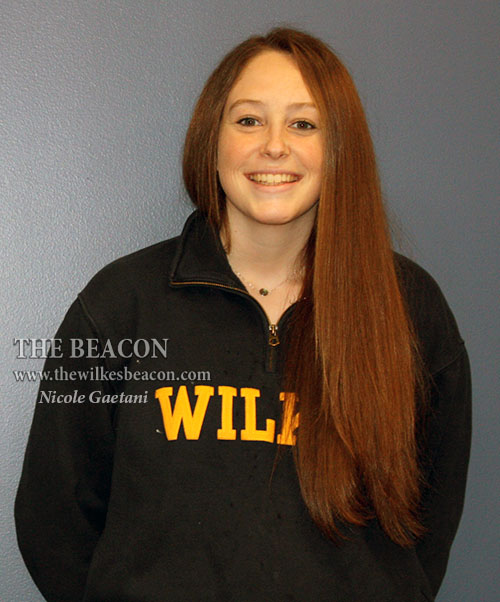 What head coach Chris Heery said: “Catey is a four year starter and a senior captain. She has given her all to Wilkes Basketball.”

I knew that I didn’t want to go far and I wanted to play basketball. Wilkes also has a great education department that I wanted to be a part of.

Old Farts and Babies. This is a game that we play during the practice before every game. The game is the freshman and sophomores (Babies) vs. the juniors and seniors (Old Farts). Whichever team makes three shots and a half court shot first wins. I must say Old Farts have had the most wins on the season.

I first began playing basketball in 1st grade. It was just one of those sports that everyone played growing up so I decided to try it and realized that I enjoyed it so I stuck with it.

I plan to move back to Doylestown and work in my home school district in a 1st or 2nd grade classroom.

“Be Colonel” means being a leader in everything that you do on and off the court. It means putting in your best effort and representing something that is more than a University.

Other than basketball, I enjoy watching Netflix (currently watching Grace and Frankie) (10/10 would recommend), hanging out with friends, and going home to spend time with my family.

Given that it is the end of the season, I hope to make the best of my last game here at Wilkes University. I hope to finish the season on a positive note and get the win with my team.

A quote you live your life by? “Life’s too short to be taken so seriously.”