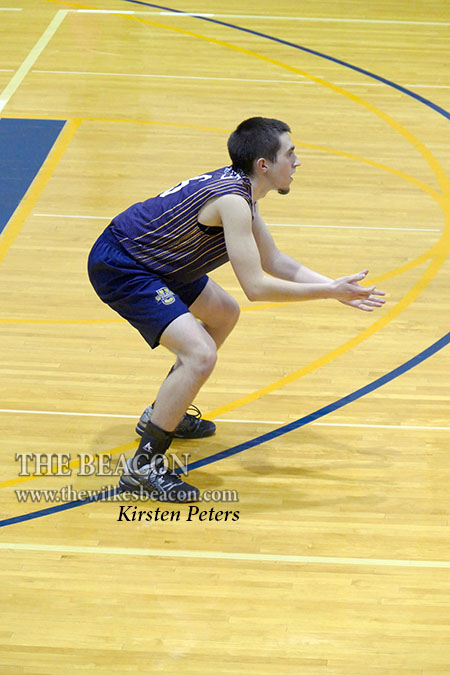 Although the Colonels improved as each set went on, they were unable to gain the lead in any of the three sets.

In the first set, the Falcons started off with a six point lead, demonstrating their dominance from the beginning. However, a kill by sophomore Cole Hefner got the ball rolling for the Colonels, putting them on the board 6-1. Later in the set, senior Michael Henne had a kill of his own to get the Colonels within four points of the Falcons’ lead, making the set 11-7. But the Colonels were unsuccessful in making a comeback.

In the second set, the Colonels battled back from a five point deficit to get within one point of Messiah’s lead. During this run, senior Brian Schumacher and Hefner each had a kill and junior Jones Mensah had a powerful attack down the right sideline, helping to close in on the Falcons’ lead. However, the Falcons picked up steam once the Colonels were on their trail, pulling out the 25-17 victory.

“I think the biggest thing we took away from that game as a team was that we finally saw the level we have the potential to play at. In the second set, we started to get excited and have a lot of fun with the game, which is something I don’t think we really did until that point in the season,” reflected middle hitter Schumacher. “Everyone was confident in each other’s abilities and we started passing a lot better and generating some really good offense. As long as we can remember to play with that same energy, I think there’s definitely still time left to turn our season around and start winning some games.”

With a fire in their stomachs, the Colonels ended the match with their best set of the night. In the third set, the Falcons took an early 5-1 lead, but two kills by Mensah and a kill by senior Daniel Sales, who is third in the conference with 80 kills and is second on the team with 81 assists and 35 digs, started the comeback stretch for the Colonels. By working together, the Colonels were able to tie the set 7-7 with an ace by Henne. Yet, this tie was as close as the Colonels would get to tasting victory, as the Falcons responded to Henne’s ace with four consecutive points of their own. Although the Colonels had their best offensive set of the match, they were unable to come out on top, losing the third set 25-19.

Despite losing the match 3-0, the Colonels had a solid night statistically: Sales recorded his second double-double of the season and the ninth of his career with 10 kills and 11 assists, junior Kyle Price led the Colonels’ digs with nine, Henne had a career-high eight digs, sophomore Salvatore Purpura recorded 14 assists, and Mensah and Schumacher each tacked on four kills.

However, Wilkes’s efforts were not enough to overcome the impressive performances of Messiah’s senior Logan Hunsberger who had 11 kills and seven digs and junior Brad Nase who had 30 assists, causing the Colonels record to fall to 2-7 overall and 0-2 in the conference.