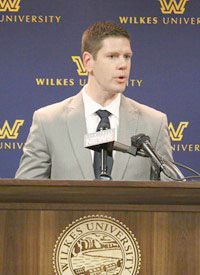 From a total of 247 applicants, Jonathan Drach saw his application rise to the top, and is now the new leader for Colonel Football.

His experience includes spending the last 11 years at Hobart College. He began as the quarterbacks coach before adding the offensive coordinator title in 2014.

Not only did Drach mention the on-the-field aspect, but also said he plans to focus on academic success as well.

“I am so thankful to have the opportunity to lead the Wilkes University football program,” Drach said. “I look forward to being a part of such a dynamic academic community that offers students the opportunity to be successful on and off the field.”

Looking back on his previous successes, Drach said he has many people to thank for where he stands today, as he mentioned he has not gotten there alone.

“I’ve learned a lot and had a lot of really great mentors,” Drach said. “At the same time, to be able to have my own program, to kind of take this in a new direction. I’m looking forward to really getting my hands on these guys and provide a lot of value for them.”

Drach hopes to carry over his winning culture at Hobart to Wilkes.

“Success breeds success.,” Drach said. “I really want to surround our guys with a lot of successful people from our alumni base, to people on campus and really give them a lot of exposure.”

His focus for Wilkes Football will be for the team to compete each and every day.

“As a team, we will look to continually improve and be process driven as we compete on and off the field,” Drach said. “I am eager to start working with the team and complete the incoming recruiting class for 2018.”

“When most of the eastern half of the Commonwealth is celebrating the Eagles and their Super Bowl, we’re having our very own football celebration at Wilkes,” Vice President of Student Affairs Dr. Paul Adams said.

President Dr. Patrick Leahy said he was impressed of both Drach’s personal and professional backgrounds.

“It’s the combination of the two that makes him such a great fit for what I believe is a University on the move.”

Leahy also reflected on the hill next to the east endzone of Schmidt Stadium, stating that he believes Drach’s young children will spend plenty of time there.

“Equal to the accomplishments on the field, Coach Drach is committed to student-athlete success off the field, and that was so noted by the players that sit before us,” Athletic Director Addy Malatesta said of the search.

Wilkes Football kicks off their season on Sept. 1 at Schmidt Stadium against Hartwick College.