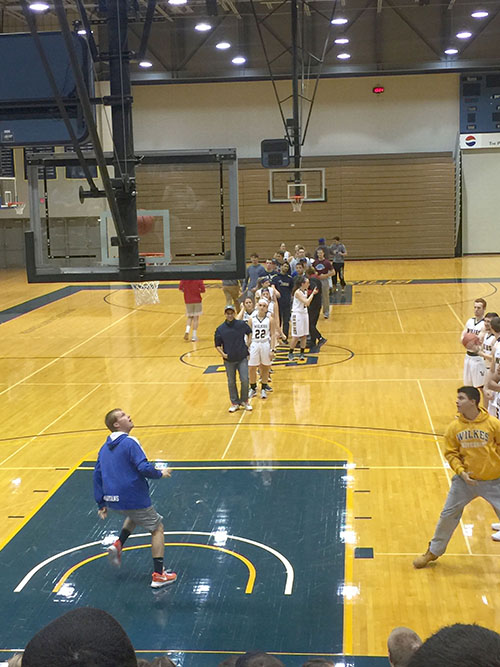 Marts Madness featured a game of knockout with student-athletes and non-athlete students.

The Marts Madness pep rally for the men’s and women’s basketball teams was an exciting preparatory event to help build excitement in wake of the start of the 2017-2018 season.

Players on both teams displayed excitement as they were introduced to the crowd. They each ran out as their names were called, high-fiving fans and teammates alike. This display of Wilkes patriotism was a microcosm for the breaking of barriers between Wilkes student-athletes and non-athlete students.  Overall, the event helped serve its purpose to bring together and unite the students of Wilkes University.

“It’s just great for our students that like sports and want to get engaged in different activities and be able to come out and become a part of something like this,” said head coach of the men’s basketball team, Coach Metz.

This was the first time that the Wilkes basketball teams have coordinated an event of this kind, but they could not do it alone. With help of members of student-athlete and non-athlete student committees, the vision of the first ever Marts Madness became a reality.

“Coach Metz actually reached out to us originally about this, so it automatically brought me back to high school pep rally cheerleader days,” said Shyanne Barrett, chair of spirit committee. “That is pretty much what this was, just that pep rally to get the teams going. It was a lot of contribution from myself, my spirit committee and SAAC.”

Barrett said this event was inspired by what essentially are pep rallies.  The environment of the Arnaud C. Marts center felt energetic from the second the teams ran in.  There were exciting minute-to-win -it games and a knock out game with non-athletes versus the athletes.  The energy was kept at a high level with the loud and exciting announcers, juniors Romeo Rosario and Kyle Gattuso.

With the help of their top notch commentary of the minute-to-win-it challenges and knock out contest, the students in the stands and the students participating all kept a positive morale that was felt throughout the entire gymnasium.

“It’s just a way to kind of have fun and make a fool of yourself a little bit and participants will get a chance to win prizes,” said Barrett. “We have a good combination of students participating and student-athletes to show that we are all one team, we’re all one family of Colonels and we all work together.”

As the night went on, and more Colonels, both athletes and non-athletes got involved, it was clear that the lines between the two were beginning to blur.

“It’s great for our guys to feel that big time college basketball atmosphere to kick off their season,” said Coach Metz, “At the end of the day, this is Division III collegiate athletics and we are student-athletes first. So the fact that our guys play intercollegiate sports is great, but they go to school just like everyone else and they are a part of the campus community, so the beautiful thing is our players are not just friends with guys on the team, they are friends with people in the campus community as well.”

Metz and Barrett both said this kind of event is highly beneficial to the teams, students and campus as a whole.  It was not only helpful to connect all of the members of the Wilkes University community, but it also helped elevate the overall morale and excitement for athletic events like the men’s and women’s basketball games.