Why Matt Grossmann was selected: Senior Matt Grossmann made quick work of his Division II Millersville opponent in the season opener on Nov. 3. He secured the pin in the first period in 1:35. His fall put the Colonels in position to secure the victory, but they would fall just short, losing 25-24. 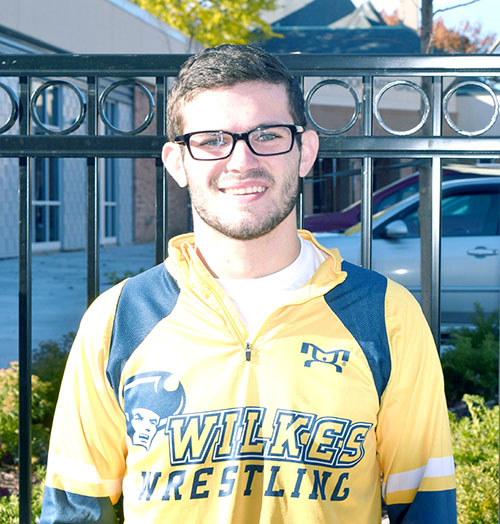 What head coach Jonathan Laudenslager said:  “Matt, has worked very hard in the pre-season and is ready for his senior campaign.  The second great thing besides taking care of his own wrestling, is the leadership he has provided for the team.  I think when you match Matt’s skill level with the hard work he is putting in, it’s a great recipe for success.”

From an academic standpoint, I really liked the small size and the fact that I could get a great education from a strong business program. Athletically I liked that Wilkes has such a great tradition in wrestling and that Wilkes is a national power house every year.

If we put jolly ranchers into a container, how many do you think you could lift?

I have very high hopes for this season. I think that our team can have a lot of success and have a bunch of All-Americans. Personally, my goal is to win a second NCAA championship and be an academic All-American.

I began wrestling when I was in first grade but wrestling has been a part of my life since I was born since my father was a high school wrestling coach for 20 years.

Getting more fans to the matches.

I enjoy playing Xbox. My games of choice are Madden and NBA2K.

My parents, they have always pushed me to accomplish my goals and have always been extremely supportive.

“Step up or step out” – Mitch Marcks

Working hard, being there for your teammates, and having pride in your work.