Why Lucas Snedeker was selected: “Freshman Lucas Snedeker scored his first career goal against Penn College in a non-conference matchup on Oct. 25. Little did he know, he would score just minutes later, helping to pour it on in a 6-1 drubbing over the visiting Wildcats. His accomplishments led him from a walk-on, to scoring not once, but twice, in regular game action during his first season as a Colonel.” 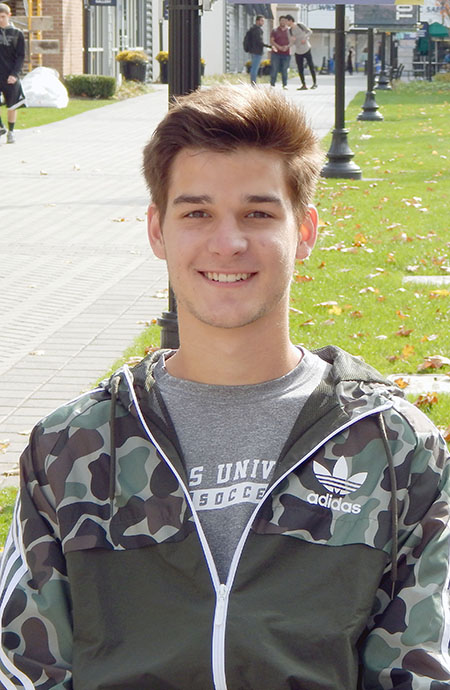 What head coach Michael Piranian said:  “He has been quite a pleasant surprise for the program.  He is a freshman this year and came to the program as a walk-on. He is a talented player, for us, that had significant playing time as a forward (played in 17 games and started 9 of those).  I think one of the highlights for Lucas, this fall, was winning an EA Sports FIFA tournament against his teammates with a surprisingly average team, Everton. My expectations for him and his output within the program will grow as he becomes more and more confident on the field.  We look forward to what his future holds here with us at Wilkes.”

As I visited Wilkes, the small and hands on class and school size. One of the first things I noticed was how friendly and helpful everyone around campus was. Soccer and my major was too other very important factors.

If we put jolly ranchers into a container, how many do you think you could lift?

The egg, of course.

Our hopes as a team were to make playoffs, as wanted by any team. As an individual player, I wanted to make a positive impact on the team and help win games in any way I could, and get as much experience as a collegiate player going into the off season.

I’ve been playing soccer as long as I could remember. Always had a great love of the game.

I would like to improve some of the gear we have. Get a wardrobe update.

Be Colonel, to me, means to have pride and take value in anything you do to give Wilkes a valuable reputation.

Haven’t had too many professors as of yet, but Dr. Kuhar has got to be the favorite of my first semester here.

The whole soccer team, for a great first season.