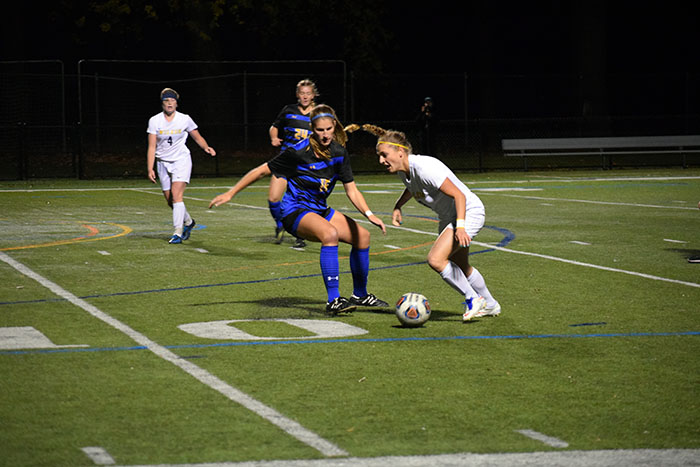 UPDATED: Kickoff is set for 1:30 p.m. at Johns Hopkins University in Baltimore, Md on Saturday. The Lady Colonels hope to advance to the second round match, set for 1:00 p.m. on Nov. 12.

Wilkes women’s soccer will be “dancing” this November as they earned their first at-large bid in program history this afternoon. The Lady Colonels will take on Connecticut College in the first round of the NCAA Division III tournament this Saturday.

The Lady Colonels were one of the last five teams to be announced in the field of 64.

“It was nerve wrecking,” Sumoski said of the NCAA.com selection show. “I was getting a little stressed. I saw some teams come up that were a little lower in the rankings and in the region. So I kinda got a little bit nervous but at the end of the day I feel like we belong in the tournament and we’ve proven that. I’m just really happy for our young women.”

Their only other bid to the tournament was in 2005 where Wilkes won the MAC Freedom’s automatic berth. The Lady Colonels fell to Stevens Tech in the opening round.

The time of the match has not yet been determined and will be released upon announcement.

Wilkes and Connecticut enter the NCAA Championships at 13-3-3 and 12-3-1, respectively.

“I think it’s going to be a great matchup and I think we’re definitely going to be in the conversation as one of the teams to advance to the next round,” Sumoski said.

Coach John Sumoski’s team looks to bounce back after a 1-0 double overtime loss against Misericordia in the MAC Freedom final. Connecticut will also be looking to get back into the win column after their loss in the quarterfinals of the New England Small College Athletic Conference (NESCAC) Tournament.

Connecticut also received an at-large bid and makes back-to-back NCAA appearances for the first time in program history. They have won at least one game in each of their previous three appearances.

“We’re going to be expecting a tough opponent. Obviously, when you’re in this tournament, you’re not going to face a weak opponent,” Sumoski said.

The winner of the match will face the winner of host Johns Hopkins (15-2-3) and Staten Island (13-5-1) in the second round of bracket play on Sunday.

Misericordia (14-4-2) will take on Hamilton (10-5-2) in the first round. Should Misericordia and Wilkes be successful, they could be on a collision course for a third round matchup, which would be their third meeting of the season.

Wilkes defeated the Lady Cougars in a 1-0 regular season matchup on Oct. 18, but was best by Misericordia in the MAC Freedom final on Nov. 4. That game was a 1-0 double overtime thriller.

Want to see the rest of the field? Check out the 2017 NCAA Division III Women’s Soccer Championship bracket here.