Why Alvaro Fernandex Maldonado was selected: Alvaro Fernandez-Maldonado found the back of the net in a 1-0 upset against Eastern. Alvaro netted the game’s lone goal in the second overtime and Eastern was ranked as the No. 8 team in the United Soccer Coaches Mid-Atlantic Region. Also, it was his first goal of the season, as well as the first of his career. Congratulations, Alvaro. 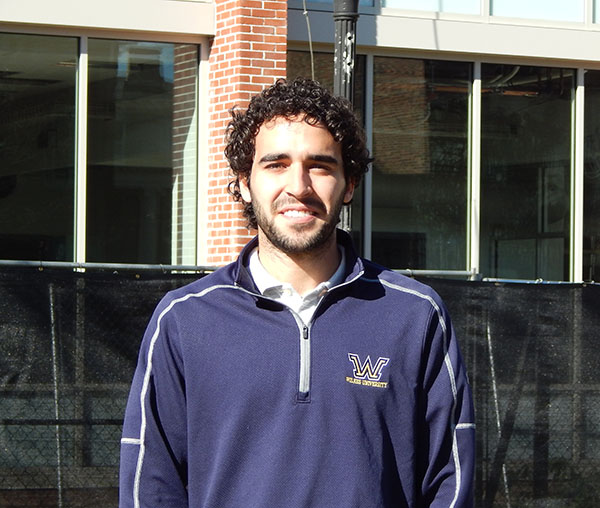 What head coach Michael Piranian said: “Alvaro has made great deal of progress since the start of our season back in mid-August.  It was a slow start for Alvaro as we opened up with a fitness test that did not go well for him.  However, he has worked hard on and off the field to grow into an integral part of our team.  I am happy for him and the part he played in the game-winning goal against Eastern. I hope there are more highlights to come though.

Work at an ICU (intensive care unit) and go to graduate school after a few years.

Michelini hall is my favorite building on campus because that’s where I lived my first year at Wilkes.

Coke, but I wouldn’t turn down a free Pepsi.

I started playing in Mexico when I was about 7 years old. I decided to play soccer because that’s the most popular sport in Mexico and all my friends played as well.

Both of my parents are probably the most influential people in my life.

If it’s suppose to happen it’ll happen, so don’t stress, just do your best.

It means being part of a team

To improve our record from last year.

It’s not a meal but the pumpkin rolls are by far the best food on campus.