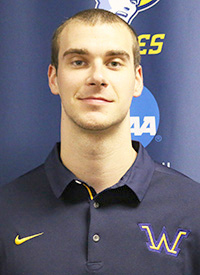 Wilkes University men’s basketball has added a new assistant coach, Nick Doyle, as they look to build on their previous season.

He replaces the outgoing Stefan Thompson. Thompson previously held the titles of Assistant Basketball Coach and Director of Intramurals. Doyle will assume those same duties.

In his college career, Doyle played for Virginia Wesleyan College under Wilkes alum, Dave Macedo ’96.  At VWC, he started and significantly contributed to a final four team in 2015.  He played every game that season in which he averaged, 7.3 points and 2.1 rebounds per game.  He also shot for 48 percent from three point range that season.

He started his first 13 games of his senior season. He averaged 10.9 points per game until he suffered a season-ending injury.

Prior to his position as the assistant men’s basketball coach, Doyle was a graduate assistant at Lynchburg College, coaching basketball and earning his master’s degree in educational leadership as well.

He became interested in a position coaching at Wilkes after meeting men’s basketball head coach, Coach Izzi Metz, and learning about the history of Wilkes’ program through his own college head coach, Dave Macedo, who attended and played basketball for Wilkes University.

“Hearing him talk about the history and the competition and the culture around this campus, it was like something I wanted to be apart of,” said Doyle. “I thought I would be lucky to have this opportunity to be at Wilkes.”

Doyle’s college coach and he had a strong relationship, which is how Doyle found out about the opportunity to get a coaching position at Wilkes University and become apart of the history of the Colonel men’s basketball team.

“I think he really influenced me saying this would be a good position for me to be in, especially right out of college. He really looked out for me and also taught me everything I know about the game,” said Doyle.

His own coach taught him a positive work ethic, how to compete and how to not take days off.  Doyle explained how he just wants to bring that positive outlook on the game to the basketball players at Wilkes.

“You can’t take days off and I’m just trying to bring that to Wilkes,” said Doyle.

Doyle believes that he will be able to transfer the knowledge that he has learned from his head coach, Macedo, will be very applicable and helpful to the current basketball players at Wilkes University.

On top of the aspect of the game Doyle has learned from Macedo,  he also feels that his experiences in the south and with both division one and three will allow him to offer more to the team here.

“I think it’s definitely going to help me getting to know the guys and meet the guys and bringing them a different aspect of the game, most of these guys are from the northern part of the country and me being from Virginia, it’s just a whole different game,” said Doyle, “People think differently and I think I could bring a whole different perspective to them coming from both division one and division three.”

The new assistant coach for Colonel men’s basketball believes he has a lot to offer and bring to the table that could overall benefit the team.  He really feels that giving them a different perspective will assist their game as well as help with what the players need in order to be successful on the court and in the classroom.

Doyle looks to be a major part of the team’s success this season and for seasons to come.  Helping individuals and the team as a whole reach their potential is something he is truly excited for.

As the season progresses, Doyle will surely be their to assist and push the men’s basketball team here at Wilkes University in order to get them to be the best that they can be this season.