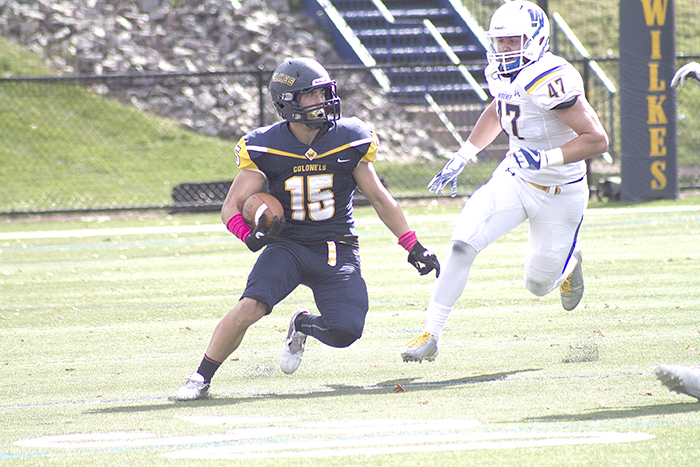 Homecoming alumni, in the 80-degree October heat, watched Wilkes hold the Widener offense to only 10 points in the first half before the Pride scored 20 in the second half to end the game, 30-7.

The Colonels started their first drive following the kick off, and shortly faced a fourth down with five yards to go. Senior punter Bobby Nye executed a fake punt, ran towards the right sideline and was stopped just short of the first down marker.

With great field position, the Pride threw a 26-yard touchdown pass and made the field goal, giving them a 7-0 lead with 11:07 remaining in the first quarter.

Wilkes was stopped again, and Widener received the punt. The Colonel defense made a big stop when second-year defensive lineman Derek Schneider sacked their quarterback on third down, forcing a 40-yard Pride field goal to up the score to 10-0.

Just before the half ended, Widener was in the Colonel’s red zone. Widener tossed the ball towards the end zone, the ball went over the receiver’s head but an unsportsmanlike call on Wilkes reset the downs for the Pride.

After a failed quarterback run up the middle, the Pride quarterback threw a pass to the corner of the end zone on second down and senior defensive back Casey Evans intercepted the pass to prevent Widener from scoring. Wilkes kneeled to end the half.

On the following drive, the Colonel’s first-year quarterback Wade Rippeon tossed up a pass that was intercepted by the Pride’s safety and returned for a 36-yard touchdown. The field goal brought the score to 23-0 at 9:24.

Wilkes struggled to put a drive together for the rest of the third quarter.

Suddenly at 11:52 in the fourth, Widener connected a long pass to the receiver down the field for an 82-yard touchdown. The following field goal lifted the score to 30-0.

Wilkes finally put points on the board when first-year quarterback Nicholas Geimer put together a scoring-drive. He first tossed the ball to Nick Yanik for 27 yards, threw another nine-yard completion to Sincere Williams then ran four yards up the middle for the lone touchdown of the game, 30-7.

“I think defensively, we definitely improved as a unit,” Nye said. “We had two turnovers against a very good Widener offense. Offensively, we had a young quarterback come in the game and showed some good signs like scoring a touchdown on his second drive.”

After the game, Evans acknowledged the alumni who came out to the game and was happy to see them.

“The atmosphere was amazing at the game. Seeing all the blue and yellow in the stands and being able to reconnect with the alumni after was special. Although the result didn’t play out the way we wanted to, it was still a great game,” said Evans.

For the last stretch of games, Nye says that this will be their bye-week and it is something that the team needs. He thinks that if the team plays like they did on the final two drives of this game against Widener, then the team should be looking good going into the week seven matchup with FDU-Florham.

“As far as moving forward, we’ll look into the mistakes we made as a team in the game and improve on them,” Evans said. “At this point in the season, all we can do is continue to get better at each and every practice, and come together as a team.”