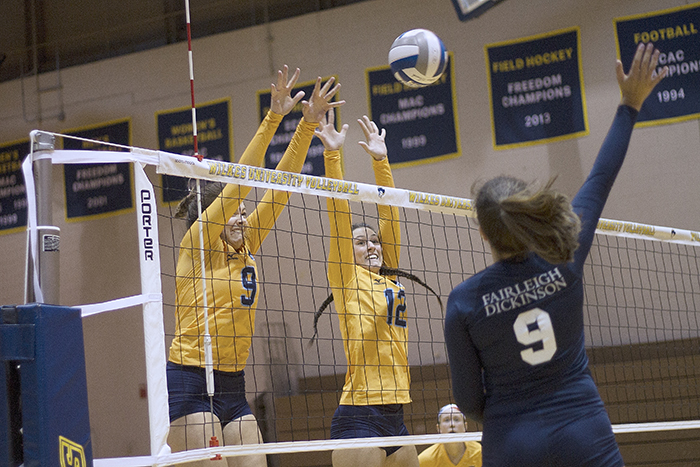 The team’s losing streak increases to seven losses after games against Fairleigh Dickinson University-Florham Campus, Penn State Behrend and Penn State Altoona.  The Lady Colonels lost two sets to three, one to three and one to three, respectively.

“After the tough loss against FDU, we continue to work on our basic skills to build confidence, enabling us to find those key points that win close matches,” said women’s volleyball Head Coach Joseph Czopek.

Despite the loss, some of the Lady Colonels set some career-highs in different areas of play.  Sophomores Jamey Mikovich and Juliet Betke both had great games.  Mikovich set a career-high with 21 kills, while Betke earned herself a career-high of 30 digs.

“Jamey and Juliet, as well as others on the team, continue to grow through this season and set personal bests,” said Coach Czopek. “Because of their hard work in practice, the coaching staff hopes the trend of career highs continues.”

This loss would make their record 4-11 and 0-3 in the MAC Freedom conference until they travelled to Penn State Altoona with match-ups against both Penn State Altoona and Penn State Behrend.  Neither of the Wilkes women’s volleyball games on Saturday went in favor of the Lady Colonels.

In this game, senior Kayley Schinski tied a previous career high of 12 kills and freshman Erin Silverman set her own personal record of five assists as the Lady Colonels moved on to their final game of the week which would be played against Penn State Altoona.

This game also continued the trend of new career-highs for Wilkes women’s volleyball.  Sophomore Alex Ferrier set a career high of eight digs in this matchup.  Senior Madison Scarfaro set her own personal record with 12 digs.  Mikovich also set a career best of 27 digs and earned herself her seventh double-double of the season with 18 kills.  Schinski also tied her career high of 10 digs.

With a record of 4-13, Lady Colonel volleyball look to break their seven game losing streak as they head to King’s College for a matchup Tuesday, Oct. 3.