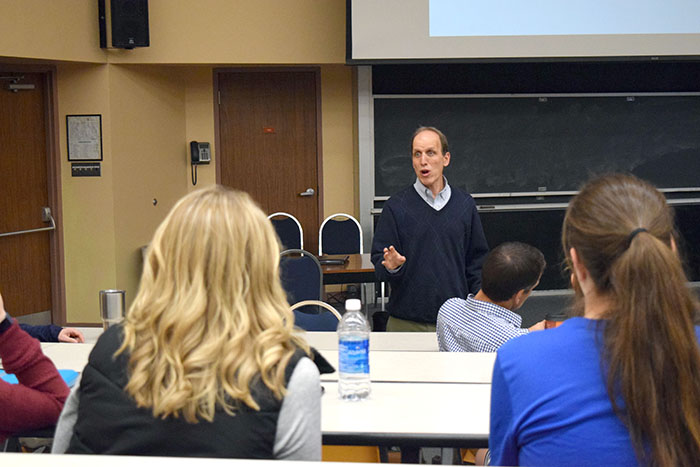 April 3 marked the beginning of Division III Week.  This week provided an opportunity for anyone associated with Division III athletics to celebrate the impact of sports and the student-athletes on their campuses.

“I want each and every one of you to walk out of here thinking you are glad I came,” said Fish as he started his lecture for Wilkes’ athletes.

Fish is a very established sports psychologist who has been giving lectures for 25 years to athletic programs across all collegiate divisions.  He has also worked with professional athletes from teams such the Philadelphia 76ers, Flyers and Eagles.

His lecture focused on unique ways in which athletes of all calibers should look at the way they compete in order to be mentally ready for competition.  He touched upon many key points for athletes of all kinds to consider when they step on their respective court, field or mat.

“The interesting thing for me is that we could be having the same conversation there [at the professional level], that we just had at Wilkes.” Fish said. “The stage they play on is bigger, but confidence, composure, concentration and communication are all skills to improve on,”

“​I believe it’s very important to celebrate the principles that we are all about: ‘dedicate, develop, discover,’” said Sumoski. “It’s an opportunity to help develop our student-athletes so that they can dedicate something new to their experience.”

During an interactive part of his presentation, Dr. Fish asked for an athlete to volunteer and attempt to balance a broom on their hand for 15 seconds.  The catch was that the volunteer could only look at the end of the broom where it was balancing.  The student failed quickly, but after being allowed to make one small adjustment of looking at the top of the broom, the student-athlete was able to balance it with ease.

Fish explained how even the smallest adjustments can change the way you compete for the better. Picking your head up after a failure can go a long way.  The broom metaphor was a strong way to close out his lecture as a majority of what he spoke about regarded how athletes need to maintain their composure, control their own emotions and not worry about pressure.