Local sports officials encourage Wilkes students to “get in the game” 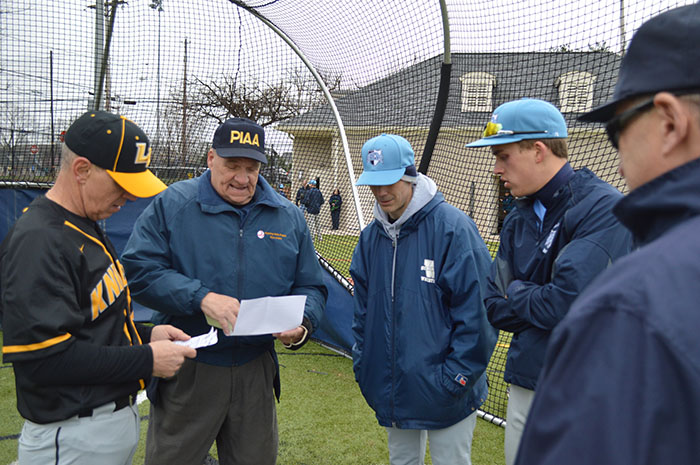 When the Colonels take the field, there is always a third team with them – the officiating crew. The third team plays a crucial role in facilitating games, but fewer and fewer people are getting involved.

At the high school level, the Pennsylvania Interscholastic Athletic Association (PIAA) offers people as young as 18 years old to get involved as sports officials. There are many opportunities an official can take. High-ranking roles include the MLB, NBA, NFL and NHL. Some of the officials working in the professional ranks first got their start at the high school level.

If not participating at the collegiate level, college students can continue to participate in athletics through officiating. In order to get involved at the high school level, new recruits must pass a rules test.

From there, students can decide how high they wish to advance and set goals, similar to other careers.

According to a PIAA press release, prospective officials can now take the rules test online.  Students can even take the test from the comfort of their own dorm room, while enjoying a game on television.

“PIAA is excited for the next chapter of officials testing,” stated PIAA Executive Director Dr. Robert A. Lombardi. “We believe that online testing will help with the recruitment of officials and also ease the registration process for prospective candidates. Athletics are an integral part of the educational process and would not exist without quality officials.”

Answering 75 of the 100 questions correctly qualifies as a passing score.

Tom Chipego currently referees boys’ lacrosse, football and soccer. Looking around his soccer chapter, He said the average age of officials in 55, the oldest in the state. But every sport is hurting when it comes to number of quality officials, including his newest sports, boys’ lacrosse.

“If you are involved in sports and want to continue enjoying that thrill, camaraderie, rush, enjoyment of the game, please join us in officiating it,” Chipego said. “Most importantly, we can use your help. We are very short of officials. New officials just are not coming in, and our ranks keep getting older every year.”

Chipego said there are numerous opportunities across the board, but no place like lacrosse.

“Whether you are playing or officiating the sport, it teaches lessons that you need for your life: working hard, preparation, execution, making mistakes, correcting yourself, getting better, not getting down on yourself, handling criticism and many more,” Chipego said.

For official Greg Zumchak, he saw the need for officials in boys’ lacrosse and joined. Already working four prior sports, Zumchak only needed the boys’ lacrosse specific training, not necessarily on how to officiate as a whole.

Zumchak said the league is planning to expand to three person crews for varsity lacrosse next year.

But leagues can only expand crew sizes if they have a large enough pool of officials to do so.

“I keep officiating because I love the team work each and every game,” Rowan said. “I enjoy helping officials get better and hopefully reach those goals.”

Zumchak echos Rowan’s sentiment, stating that he enjoys his time both on and off the field.

“I enjoy officiating for the exercise and friendships I have developed with fellow officials,” Zumchak said. “Officials come from all occupations and it is an excellent way for a young person to network with people to learn about opportunities off the playing field.”

Rowan, a chapter rules interpreter in multiple sports, works very closely with younger officials to ensure they are progressing.

“If they have goals that are just the high school level, that is great,” Rowan said. “I want every official I work with to reach his/her goals which will then make me feel like I had something to do with their success.”

“I needed to know the rules so I could teach them the right way to play the game by the rules,” Kaskey said.

He encourages others to join the ranks, stating that he got his start in Little League and progressed upward.

“Not only do we need umpires to take over when we retire, we need umpires who are passionate about the games they umpire in,” Kaskey said. “Young people who played the game should want to give something back to the game. The (high school) Baseball Rules Book is 88 pages long. It takes time for them to get familiar with all of the rules and interpret the rule as it was written.”

When push comes to shove, officials are sometimes on the receiving end of criticism.

“I very rarely ever take criticism personally,” Zumchak said. “Most of the time people yell at the uniform and not the individual.”

“After 40 years of officiating in five sports you take a lot of grief from fans, players and coaches,” Kaskey said. “But at the end of the day, you know someone learned something from you. It could be a rule or some kind of lesson life that they can carry on in life, like sportsmanship and fair play. That makes it all with worthwhile.”

Chipego said while no one gets rich officiating, there are financial benefits to the job.

“I use my officiating money to supply my cooking and craft beer needs,” Chipego said. “This year I am saving for a Dry Aging machine for beef or a Freeze drying machine. You can save money for a vacation, hunting trip, skiing trip, anything else you enjoy.”

“But at the end of the day, you know someone learned something from you,” Kaskey said.

For more information on how to become a sports official, visit PIAA.org and click on the “Officials” tab.