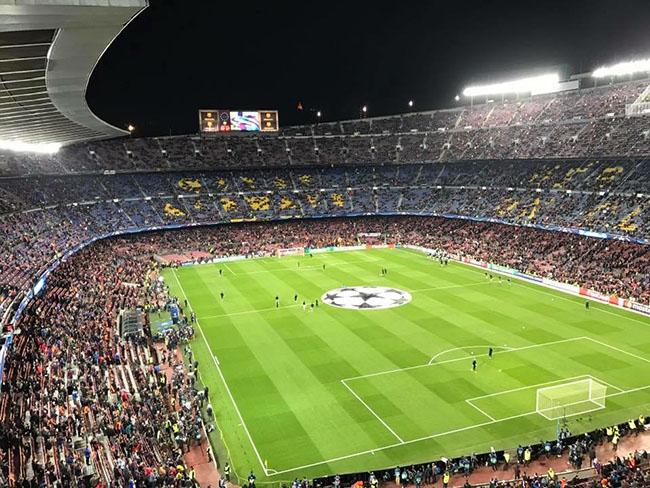 On Mar. 8, at Camp Nou Stadium, FC Barcelona defeated Paris-SG in a historic comeback, 6-5 in aggregate goals after being down 4-0 after the first leg.

Wilkes women’s soccer recently enjoyed a 10-day spring break trip to Spain. The highlight of the trip: witnessing first-hand the legendary FC Barcelona comeback at Camp Nou Stadium in their round of 16 UEFA Champions League game.

The group made its fourth trip overseas since 2005. Recent trip destinations included Germany/Belgium/Netherlands, Brazil and Italy. However, those trips did not include an unforgettable soccer match like this one did, aside from Brazil, when in 2010, then team witnessed the Copa Liberatores (South American Club Semi-Final) between Internationale and Sao Paolo in front of 98,000 people.

The game featured visiting Paris Saint-German against historic Barcelona. Trailing 4-0 after the first leg, or game on Feb. 14, Barcelona had a monumental task at hand. They needed to win the aggregate goal total in order to move onto the quarterfinal round. It would be Sergi Roberts who sent home the game winner in the 90+5 minute of the game.

In the game, Barcelona managed to score six goals, two of them during extra time, and 3 in 8 minutes, in order to advance. Some have labeled this game as the “greatest comeback of all time”. Since the UEFA Champions League began in 1955, there has never been such a comeback.

The women’s soccer team was among over 96,000 fans in attendance. After the game, the streets turned into one giant party.

Junior Elena Denger said it was one of the best experiences in her life.

“It was an absolute unforgettable experience,” said Denger, “After the game, there were random people hugging us because they were so excited.”

Head Coach John Sumoski agreed the atmosphere of the stadium was unbelievable.

“It is hard to put it into words the emotions of the stadium after that goal,” Sumoski said.

Sophomore Alyssa Shaver, who was able to take numerous photos of the experience, enjoyed taking in the sights as well.

“It was the best experience of my life,” Shaver said, “I really enjoyed the game as well as heading up to the mountains. It was such a nice view.”

Although it was spring break, the team wasted no time. They woke up between 8 and 9 a.m. everyday in order to make the most of their time there. Denger said they would pile on the team’s bus and hit the road.

The team was also able to explore the sights of Spain, such as shopping in downtown Barcelona and visiting Camp Nou Stadium the day after the historic game. They also included a trip to the La Sagrada Familia church in Barcelona.

Shaver said the historic architecture of the building was quite interesting. She said she was in awe at some of the designs.

The team also competed in two friendlies against local teams. Although they lost both games, it was all in an effort to get additional time on the field in preparation for the 2017 fall season.

Shaver and Denger both said the trip provided an opportunity to brush up on their Spanish.

Denger, a student within the pharmacy program, noted the differences between pharmacies in the United States and Spain.

“The dosages between here and there were different,” Denger said. “It was interesting to see how they do things differently.”

The overseas trek spurred excitement from the players. Denger noted the team’s “GroupMe” group conversation was not only used for sharing excitement, but asking last minute packing questions as well.

The trip however, did not come without a hefty price. The team vigorously fundraised in order to not only pay for the trip, but have enough spending money while in Spain as well.

“We did a great deal of fundraising through our ‘Futsal Frenzy’ tournaments and Campaign Sports,” Denger said.

Sumoski said he mentions the fundraising part even before recruits step on campus, noting its importance.

Simply put, without having enough money, the team would not have the ability to go.

Sumoski sees the overseas trips as another selling point during the recruiting process. He mentions the trip a great deal to spur the interest of prospective students.

His goal is to have an overseas trip every three year so that every player who comes through the program has the chance to go.

The trip serves as a unique way to mix the academics of learning about a different culture along with the athletic portion of getting additional time on the field.

Editor’s note: Special thanks to Kathryn Ruszkowski for assisting with photo captions.