One senior and one captain: Casey Evans leads by example 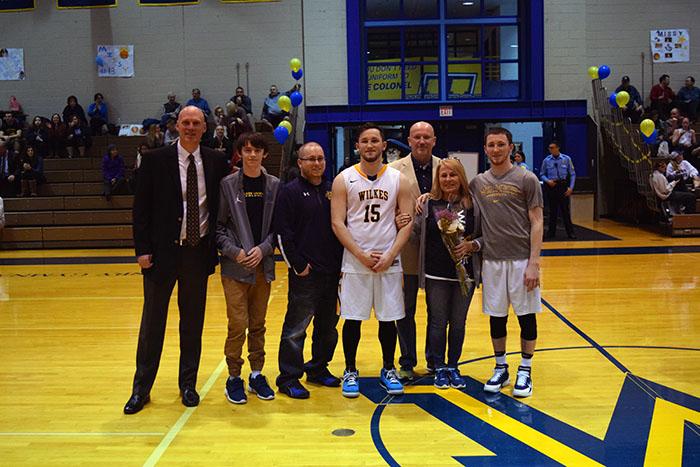 Casey Evans, the only senior on the men’s basketball team, was recognized on Senior Night and his family was there to support him. Wilkes beat King’s for the second time this season with a score of 84-68.

Evan’s final season of basketball has been filled with ups and downs, but has ultimately been pretty good. He has noticed that the team has grown substantially this season. As far as his own performance, he believes he did his job. His strong defense enables the team’s offense to perform better.

He was excited to play in the Marts gymnasium environment against King’s since the rivalry generates a lot of fans. Evans, however, noticed that there was not quite as many fans as last year because the game was moved from Saturday to Tuesday. He was proud of how prepared his team was for this game.

As the only senior on the team, Evans was chosen to be the team’s one and only captain. As the only captain, the rest of the players on the team look up to him. Evans leads the team by being the most poised and never breaking down mentally. After playing two years of basketball at the Rochester Institute of Technology, Evans likes to teach other players about basketball. He also helps his fellow players with school work.

The basketball team is very close knit, and they stick together outside of the Marts gym. Whether they are going bowling or eating, the team is always together. In practice, players are honest about each other’s performances and they take each other’s criticism well.

The two brothers play the same position, point guard, on top of being on the same team. Evans likes to practice at the same position as his little brother because they can play against each other in practice. He says that they get into battles during practice, and always wants to teach him more. He is proud to say that he will leave his brother behind with two great coaches, Coach Metz and Thompson. Thompson was an All-American point guard when he played, which is a great opportunity for his brother to reach his maximum potential as a college basketball player at his position.

“It was nice on Senior Night that the coaches started me at the three-position over Mark Mullins to start the game because I had the chance to be on the court at the same time as Connor. That did not happen much this season,” Evans said.

Casey and Connor look very much alike. People mistake them as twins all the time, even though they are two years apart. Since Evans has played football as well the past two years, football coaches and players have both mistaken Connor for Casey.

After two years at RIT, Evans’ brother decided that he wanted to visit Wilkes. Evans went with his brother and his family to tour the campus. They picked the day that Wilkes basketball was playing at King’s, and they went to watch the game. Evans vividly remembers the enthusiasm in the stands, and that was one of the deciding factors to come to Wilkes.

“When I came to visit Wilkes, I noticed how small the school was and liked it. I feel like I know way more people at Wilkes than I did at RIT, and RIT is a much bigger school,” said Evans.

For the past two years, Evans has played both football and basketball while pursuing a degree in mechanical engineering. He acknowledges that it can be difficult to have such a busy schedule, and this semester he is carrying 17 credits. He likes to stay busy though because it keeps him focused on his schoolwork. For his degree, his labs can take hours and he never skips a chapter in his book because his teachers test him beyond their lectures and readings.

“My commitment level to Wilkes athletics is very high. I’m not the type of person who would miss practice, show up late or even miss a work out. Both my football and basketball coaches hold us only to the highest standards. I believe that athletics have taught me a lot, and it transfers into the classroom,” Evans said.

Evans will return to Wilkes for his third year next year, and he still has one more year of eligibility for football because he did not play football at RIT. He is excited for the players returning to the team next year.

“The basketball team has learned so much this year, and I expect them to win the MAC next year,” Evans said.