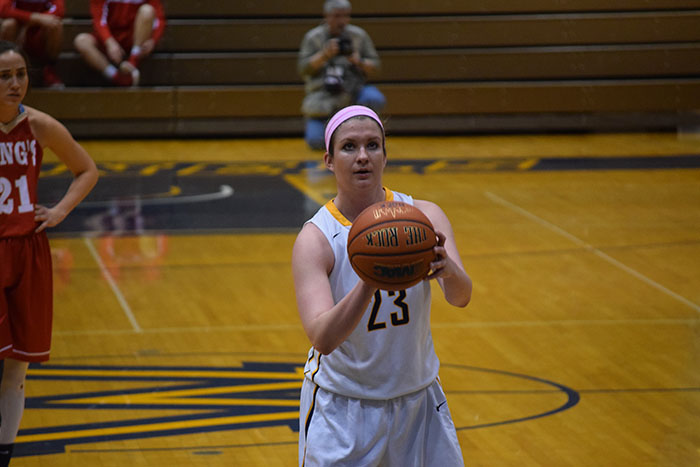 On Feb. 14, Wilkes Women’s basketball team laced up for the big game on their home court.

It’s one of the biggest games of the season, it’s the rivalry that former athletes have told you about since you decided to play for Wilkes, it is the game that is anticipated all year long, and it is here.

The King’s College/Wilkes University rivalry is a tale as old as time. For the three women’s basketball seniors this game was much more than another rivalry game, this was their last time to compete on their home court.

Prior to the start of the game, we caught up with the three seniors to discuss just how important this game truly is.

Emelie Meinhart, an entrepreneurship and marketing major, told us what this game meant, not just to her but to her team, she said.

“This is the most important game of my college career. Not only are we playing against our rival, but it’s the last game that the seniors get to play on our home court. Getting this win is everything.”

Marissa Oertner, an education and special education major, followed up with, “It’s a game we know we can win and it would mean the world to get a win on our senior night.”

This season the Wilkes Women’s Basketball will graduate three senior athletes, Marissa Oertner, Emelie Meinhart, and Haley Mesaros. These three athletes came in their freshman year together and are finishing the same way.

On Tuesday night, senior night, they were able to celebrate a hard fought four years on and off the court. As four-year collegiate athletes, these three women were able to gain various experiences that most college students will never get.

While reflecting on their four years, all of them immediately looked at each other. It was clear what they would take from this experience, and that is each other.

Meinhart followed up with, “Definitely meeting the amazing people that I did over these last 4 years. If I wouldn’t have played here at Wilkes, I wouldn’t have these great friends that I have.”

Oertner finished with, “I had an amazing four years playing basketball at Wilkes and although we may not have won as many games as I would have liked to, the friendships and the memories I made are irreplaceable; so other than maybe winning more, I wouldn’t change a thing.”

Although Tuesday night was a celebration of these three seniors three years, they were clearly very focused on the competition at hand.

The King’s game is one that holds a special place in every Wilkes athlete’s heart. I asked the seniors how they had prepared for this game, what it took to be mentally and physically ready to compete prior to Tuesday’s match up.

Marissa Oertner discussed how the team had been preparing since their last match up with Kings College, previously in the season. She said, “We played kings earlier this season and it was a close game. We watched our first game and are better prepared this time around. We know just what to expect, and will use that as an advantage.”

Wilkes entered Tuesday’s match up with a 5-18 record for this season, holding a 0-12 record within Middle Atlantic Conference play. While Kings entered the game with a 4-18 record, and a 2-13 record in conference play.

After the tough defeat, the women’s team fell to a 5-19 overall record, and a 0-13 record within the MAC.

Wilkes Women’s Basketball went into this game confident and excited. Meinhart, stated, “ we were prepared, focused and driven. We all truly wanted this win, we just didn’t connect those feelings on the court.”

The team started strong, putting the Lady Royals on their toes, putting up a 9-point lead in the first three minutes of the game. They were able to hold the lead all throughout the first quarter of play.

While the Lady Colonels continued their hard fight throughout the game, they could not keep up with the King’s three point shooting, which ultimately led the Royals to their victory. The three Wilkes seniors were major contributors to the entire game.  Mesaros exceeded her career high with 24 points and six rebounds, while Oertner was not far behind, contributing 15 major points, and seven rebounds.

Although the game did not end in the Lady Colonel’s favor, the team did not hang their heads. They were able to take away a lot from this game, which they will ultimately take into the rest of their season.