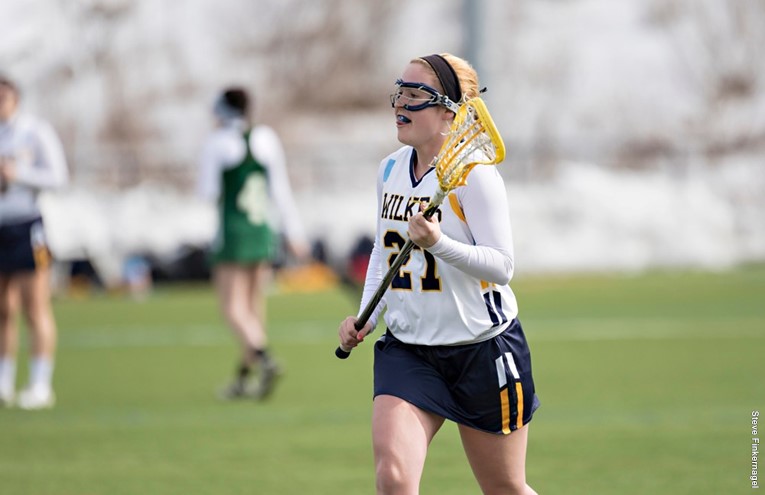 Jessyca Held, a key leader for the team

As we are in the heavy midst of the winter sports programs, where the various athletic teams are fighting for their spot to continue on their season, another season is just getting ready to begin. The preseason polls are out, the practices, conditioning sessions and weight lifting has begun—it’s spring here at the collegiate sport level.

As hard as each team has been working in the offseason, it is time to prove it in season play.  When preparing for this season Coach Towey, Head Coach of the women’s lacrosse team, reflects on last season, while setting expectations for the coming season. In a recent interview, Coach stated, “We are really looking forward to this upcoming season. We lost eight seniors last year, some the stats and all time leaders at Wilkes for scoring. We have a very young team but we are very driven and our 10 freshmen are working really hard to get acclimated to the college lacrosse game. Our team is a very tight knit group so the freshman have really bonded well within.”

Each new season brings new challenges, new positions to fill, and a new drive from all individuals on the team.

While the Wilkes University men’s lacrosse team is still fairly new to the line up, they have a passion to reach the next level.

When a new team comes about, specifically at the collegiate level, recruiting is a challenge. Newcomer, John Luna, spoke about some of his expectations going into his first season as a Colonel. Luna said, “I am most excited about just playing some lacrosse! He exclaimed with no hesitation. He continued to say, “I have been preparing for the season with a lot of weight training, endurance runs, and skill work, I’m just excited to see it all play out.”

Luna’s fellow freshman teammate, Connor Daly followed up with, “The team has done a lot to prepare, to make sure not only as freshman or individuals, but as a team we are ready to improve the name of Wilkes University Lacrosse, in the school, in the community, and in college lacrosse.”

Both the men and women’s lacrosse teams have had a large recruiting year, brining in large numbers of first year students. The men’s team currently has nine freshman on their roster going into the season, while the women’s team has ten incoming freshman to add to their line up.

This may seem like it could be an obstacle for the teams, carrying a younger, less experienced group. But Coach Towey doesn’t see it that way, stating, “I think we are young this year so it will be a learning experience throughout each game to build consistency. I think this year we will learn and grown with each game and get a better feel for one another, how to finish as the season goes along. The only obstacle is youth right now and I wouldn’t really classify that as an obstacle more like a learning curve is all. Everyone just has to learn to play on the same page, work with each other and everything else will follow suit.”

The men’s team begins their season Feb. 22, challenging Marywood University. The women’s team will be following close behind, starting their season March 2, shortly before they head to Hilton Head, SC to test their skills prior to conference play. The seasons have barely just begun, but the stakes are high, as many newcomers have large roles to fill. We wish both teams the best of luck in their upcoming season.