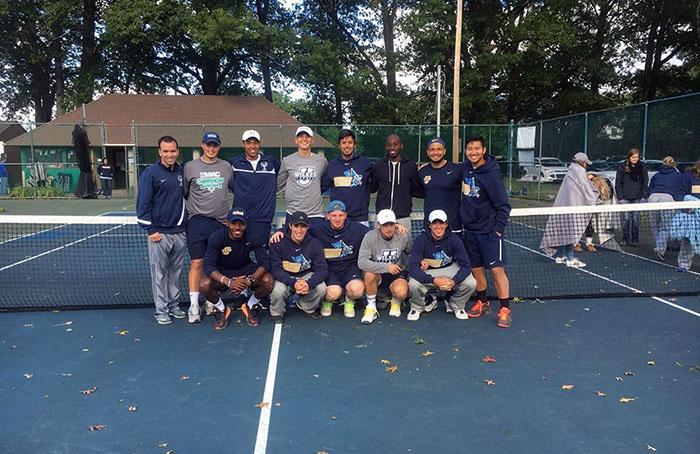 Wilkes University’s Tennis programs have constantly demonstrated winning characteristics within their squad, however, there is one word in particular that can consistently be tethered to their program, that word being dynasty. The dictionary definition for dynasty is portrayed as a succession of people from the same family who play a prominent role in a specific field

Christopher Leicht, Head Coach of Wilkes’ Men’s and Women’s Tennis programs has lead this particular dynasty, or to him viewed as family. Leicht has influenced the programs in a positive manner as his programs have been dominant on the court and of service to humanity off.

Leicht has recently asserted his presence in a highly competitive collegiate tennis realm as he has been named the Professional Tennis Registry Jim Verdieck College Coach of the Year. It is fitting that an award named for Jim Verdieck, once known as ‘the winningest coach in college tennis history’, goes to Leicht who has reached his own historic milestones.

Leicht is in prestigious company as this award has been honored to many influential coaches in collegiate tennis such as Coach Lin Lorig of the University of Indiana, and Brigham Young University’s Brad Pearce.

“It is a very rewarding honor and anytime the Wilkes Tennis name comes up on the national scene, it is a great thing for this school and tennis program.” said Leicht

The award will be presented to Leicht at the 2017 PTR International Tennis Symposium. The registry is the largest global organization of tennis teaching professionals with more than 15,000 members in 125 countries.

The Bloomsburg University graduate has been taking the Wilkes Tennis program to Hilton Head Island, South Carolina during spring break for PTR’s spring tennis fest since 2012. The event, which includes more than 40 educational presentations for tennis teachers and coaches, will be held February 15-18.

Entering his 15th year as Head Coach for the Men’s team and 14th for the women’s, the Danville Area High School graduate lead the women’s contingent to 10 straight MAC Freedom titles. The men have sustained nine top honors in a row with each of those conference titles giving the Colonels and Lady Colonels an automatic berth in the NCAA tournament.

Leicht has coached 49 All-Conference selections, including six Rookies of the Year, and seven Players of the Year. It’s evident his leadership has produced student athletes of commendable character as many of his teams have been named ITA All-American Academic teams 18 times.  Although this is not the first time he’s been recognized for his influence as Leicht has accumulated 16 MAC Freedom Coach of the Year awards.

Along with leading a consistent, dominant force in the MAC Freedom, Leicht also tackles on the responsibilities of being the Director of the Recreation and Athletic Center at Wilkes University. His ability to balance an abundance of duties and maintain a purposeful focus on making a difference within the Wilkes Tennis programs has served as a testament to his philosophy of not only leading by example but living by it.

While he guides his athletes to achieve their goals, Leicht emphasizes the significance of giving back. He believes the service to the community will supplement their already well established values.

“We always talk about representing Wilkes Tennis in the best way possible, on and off the court.  Community Service is one way in which our athletes can help serve the community in a positive way.  The largest service project we undertake each year is with the Special Olympics Group.  We have been involved in the local area, and also on our spring break tennis trip” said Leicht.

He is proud of this international recognition, yet feels that the largest component of Wilkes Tennis’ success is due solely to the players’ discipline and their positive energy to achieve excellence.

“We have had really good captains over the years, and this is the single biggest reason for our success.  When the younger players see the captains working very hard and prioritizing tennis, it really filters down to the new players. I have been very lucky, including this year” stated Leicht.

A Senior on the Men’s squad, Troy Haas believes Leicht’s strengths are in his aptness in noticing emerging talent in recruits that have not fully flourished yet including the genuine care he directs toward his athletes. Leicht’s light hearted persona allows him to be a relatable and empathetic leader.

Coach Leicht looks to continue the winning tradition of Wilkes’ Tennis programs as they commence their spring semester competition on Saturday February 18th at the Drew Invitational in Madison, New Jersey.