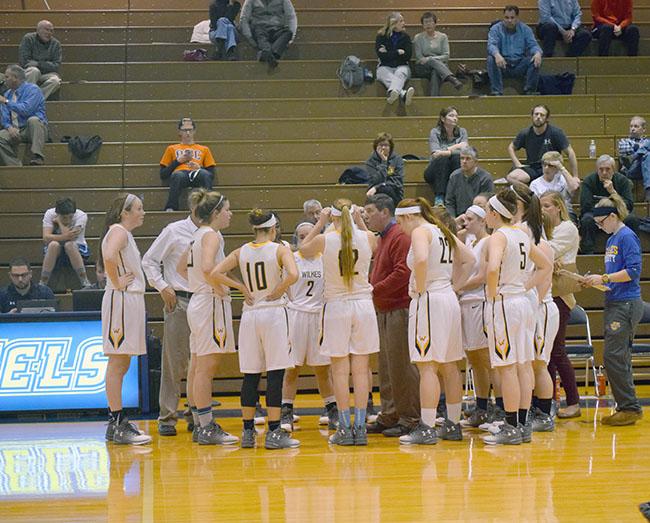 Women's basketball huddles during a timeout against Misericordia.

With a record of 4-13, the Wilkes University women’s basketball team is on the final stretch of its season.

The women started off strong this year with wins over Penn State Wilkes-Barre, Alvernia University, Keystone College and Summit University of Pennsylvania.

Chris Heery, women’s basketball head coach, said, “We started off strong and since we got into conference play, we had some injuries and we haven’t been able to turn the corner yet.  We play everybody one more time, so we are hoping in the second half of the conference season that we start to turn it around.”

In order to get back to being successful on the court, the Lady Colonels need to stay healthy.  Coach Heery attributes some of the team’s lack of success to the injuries they have suffered.

On top of staying healthy, Heery also stresses the importance of taking advantage of scoring opportunities on transitions.  He accredits the team’s average of 60.4 points per game to not being successful in scoring on transitions.

“Despite us hitting a little slump here, the team is very positive and I attribute that to good leadership,” said Heery.  “Our seniors are doing a good job of doing a lot of team building activities outside of the confines of basketball and I feel that has been helping us.”

It is very important to Coach Heery that the team has a strong relationship outside of competition because it translates to having chemistry on the court.

“Because there is a good rapport with them, everything is just very positive.  Even though we have come off of a couple tough losses in a row, we will have practice later today and you would not even know we were on a little bit of a losing streak right now,” said Coach Heery.

With a goal of being the first Wilkes women’s basketball team to make it to the postseason in a long time the Lady Colonels have a tough road ahead.  If they can get back to the higher scoring percentage they had in the beginning of the season and improve on defense, postseason is not out of the question.