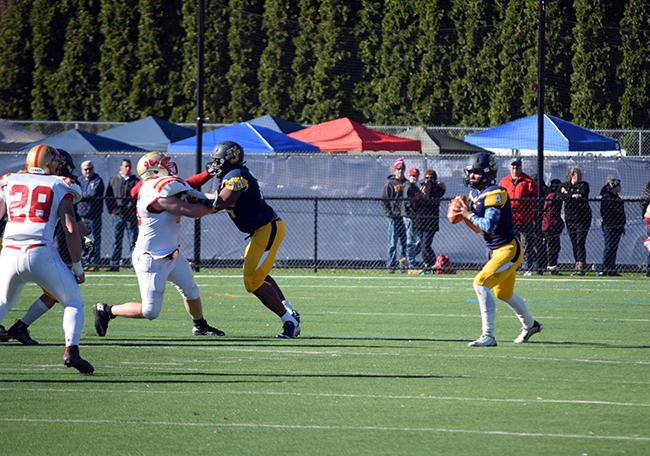 The Colonel’s late-season momentum was no match for the Monarchs. At Schmidt Stadium, King’s College took home the Mayor’s Cup after defeating Wilkes, 42-14.

Four-year starting quarterback Ryan Dailey started his senior season off slowly, claiming two wins prior to their first win of the season against Misericordia. Dailey went on to lose three more games until he faced a season-ending injury in the game against Albright.

The back-to-back losses against Delaware Valley, 10-52 and Albright, 13-69 were two very disappointing games for Wilkes. First-year second-string quarterback Jose Tabora took over the game and may not have affected the Albright game very much, but he had a significant impact on the results of the final three games.

Tabora’s first two starts both resulted in wins. The first game he started in was against Lycoming at home, and the Colonels won a narrow 28-26 win. The offensive run game was doing exceptionally well, along with Tabora running and passing effectively to various receivers.

Tabora’s most impressive achievement was going to Stevenson University, in MD, to deliver the first and only loss of the Mustang’s near-perfect pre-season record. Tabora broke the school record for yards passing in the game by throwing for 453 yards, and tied the record for five total touchdowns in a single game. Stevenson was ranked as high as the No. 12 team in the country.

“The season didn’t show how our team is. We are not a 3-7 football team. Jose has a bright future and I’m proud of him,” said Dailey.

In the final game of the season, Tabora passed the ball 19 yards to William Deemer in the end zone early in the first quarter of the game. The early touchdown seemed promising, but the Monarchs then scored shortly after to tie the game. Before halftime, the Colonels gave up two more touchdowns and one touchdown was scored with only 36 seconds left on the clock.

Last year, Wilkes took the Mayor’s Cup home after playing on the other side of Wilkes-Barre. The Colonels scored 17 points in the first quarter after a field goal, a 37-yard run for a touchdown and a fumble recovery touchdown. Their early lead held strong and the game ended, 24-17. The seniors have experienced the excitement of winning the cup, but they want their younger players to experience it too.

“The season was one with trials and tribulations. Overall, I wouldn’t want to have played the season with any other group of guys. As far as the final game, it hurts but I know the guys still on the team will bring the cup back next year,” said senior defensive back Ondre Roberts.

“This team has a bright future. The season was a blast with my brothers and I gave everything that I could for them. We fell short in the final game, but we never die easy,” said senior offensive lineman Ryan Dupre.

The football team concludes their season with a record of 3 wins and 7 losses. After four years of Dailey’s incredible work, Dailey passes the baton off to their new quarterback, Jose Tabora.