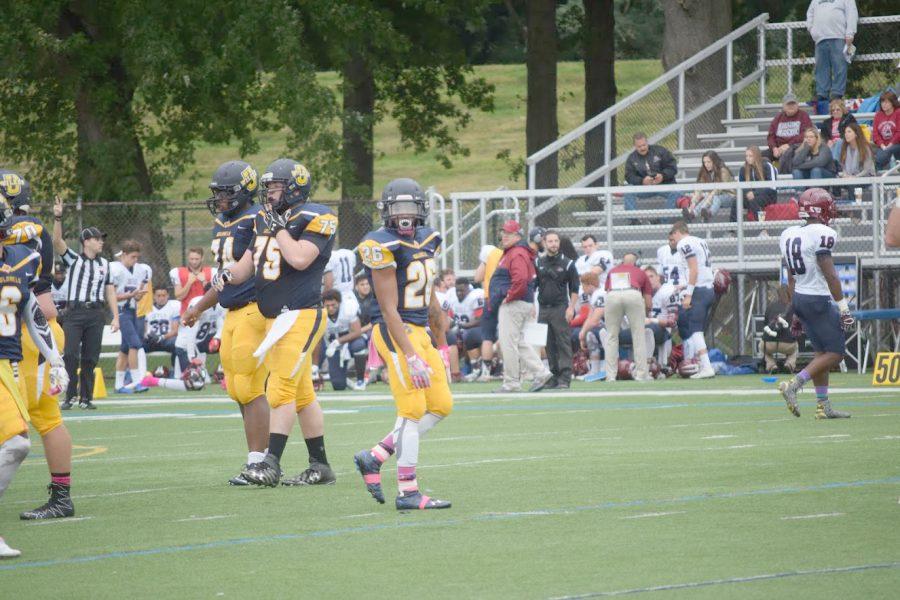 Wilkes #26 Devon Fink and #75 Anthony Marcincavage look to the sideline.

The Colonels have proven resilient as they overcame a four game loss streak by picking up momentum with a win at home over Lycoming College as they head into the illustrious rivalry matchup against Kings.

The Wilkes-Barre community is well-versed in the history of this game as it is predominantly referred to as The Mayor’s Cup. The Colonels pulled out the win against the Monarchs last November and will look to keep the Mayor’s Cup on Wilkes’ side of River Street.

Freshman Jose Tabora showed promised in his first collegiate start against Lycoming College by navigating Wilkes’ offense to put up 28 points in the first half in a game that stayed tight into the final snap.

“Starting my first game of the season made me feel a little nervous.” said Tabora.

Tabora tallied three touchdowns for the Colonels offense as the freshman quarterback rushed for a touchdown along with connecting with receivers William Deemer and Aaron Coyne in the end zone.

Although the graduate of St. Augustine Prep knew he had pressure riding on him against Lycoming, he used his nerves to guide him to lead the offense and gained reassurance by his faithful teammates.

“I remembered I had a team that was behind me 100% and all I had to do was play the game I have always played. Getting the win was awesome, always is.” Said Tabora

Leader of Wilkes’ Defense, Tanner Stengel demonstrated dominance in his last few showings as a Colonel as he amassed a career-high 20 tackles, inclusive of 1.5 sacks.

Stengel was awarded MAC Defensive Player of the Week for his relentless performance. Stengel, a senior engineering major is sitting at fourth in the MAC in defensive statistics with 46 solo tackles. The Allentown native is humbled the award, yet it will not dampen his will to prepare.

“It’s quite an honor to be named MAC Defensive player of the week. I try to look at stats as little as possible because there are more important things to focus on” Said Stengel.

As a captain of the unit, Stengel knows the end game is all about leveling up. His contribution to the team has been predicated off his readiness to learn and develop.

“I feel as though I have grown not only as a player but as a leader as well. I feel as though each season, game, or practice I learn something new about myself that allows me to better my abilities.”

The Mayor’s Cup will be set for kickoff on November 12th at 12 p.m. in Schmidt Stadium.

The Colonels are confident to square-off against Kings at home as they build off their in house win over Lycoming College.

A game that generally draws the most attention to the two football squads on River Street is shaping up to be a battle as Wilkes enters the game with a 2-6 record, while Kings stands at 4-4.