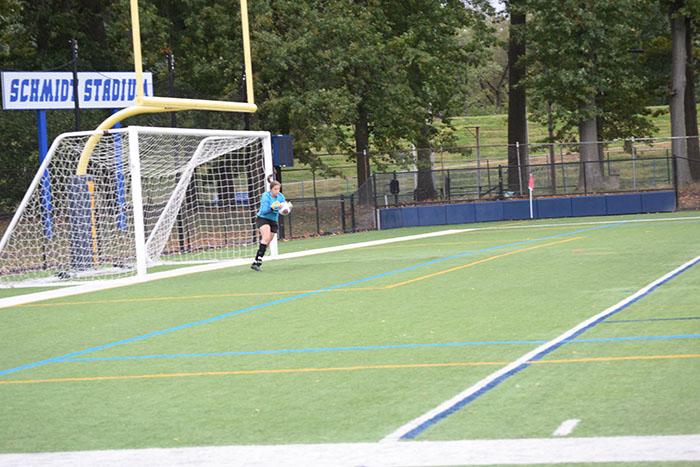 After shutting-out Eastern, DeSales and then SUNY Cortland, the Wilkes women’s soccer team has found a rhythm entering the playoffs. The team’s record is now 6-10.

Senior goalkeeper Alyssa Young kept all three of the teams off the board, which led Wilkes to win each game 1-0.

“Shutting-out three teams in a row is a huge bonus for me as a goalkeeper. It not only gives me a boost of confidence, but also my teammates because they are the ones who help me out there. To have any shut-out in a game is priceless,” said Young.

The confidence boost should carry over into their final conference game against Manhattanville on Oct. 29. A win would be important for their confidence going into their first playoff game, and also important because a win would rank them higher in the tournament.

Senior forward Caroline Connor scored the lone goal in their recent victory over DeSales. Last year, Wilkes lost the championship game to DeSales. As seniors, both Young and Connor are hoping to contend for MAC Championship title.

“Scoring the goal against DeSales was much more meaningful than any other goal in my opinion. They are the team that stole the MAC Championship from us last year, so being able to say we beat them this year is truly rewarding,” Connor said.

“At the end of the season, I’m looking forward to receiving the title of the MAC Championship. My team and I have worked so hard to where we have become, and being a few games away from winning it would be a dream come true for me personally as well as my teammates,” Young said.

The soccer team was at 3-10 before its three-game win streak. They faced being turned away from the playoffs, but players like Young wouldn’t let it happen.

“Although we may not have the best record out there, we as a team are much more than that. Our team chemistry is positive and we work hard in training to try and achieve wins throughout our season. We may have our ups and downs throughout the season, but we accomplish anything because we are a family,” said Young.

Connor is not only excited to play in a playoff game, but she is excited for the people who haven’t played in the playoffs yet.

“I think everyone is extremely excited to get back to the playoffs and to finally win. I know that our first-year players are excited and they don’t even know the feeling yet. These games are going to be so intense and I can’t wait for it!” Connor said.

Consult www.Gowilkesu.edu to find where the Lady Colonels will play their semi-final playoff.