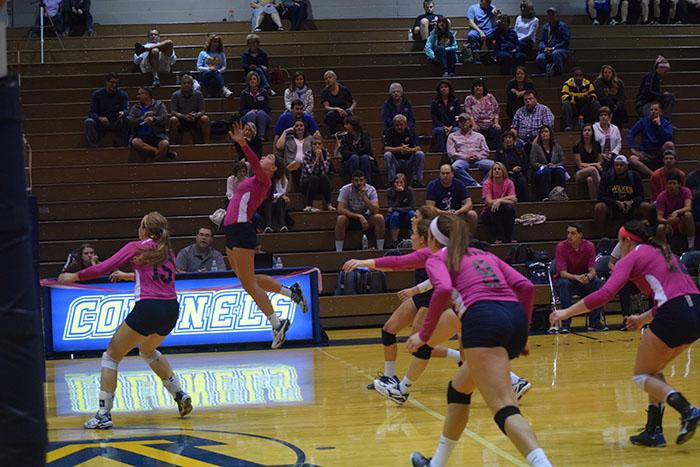 As the Lady Colonels get well into their season and into conference play, each game becomes more vital than the last.

This past Tuesday, the Lady Colonels took on local rival King’s College at home for a hard fought full five set match. This game was also Wilkes University’s annual Breast Cancer game, to honor and support Breast Cancer in the month of October.

The team came out fighting, keeping the Lady Monarch’s on their toes, starting the game with two strong first sets that led to the Colonels taking the lead early on. Wilkes did not give them a chance in the first two sets, in an overwhelming point win first, 25-12 then continued the streak with 25-17.

As the third set came around, King’s College came back winning the third set 25-15 over the Colonels, then the forth 25-17. The Lady Colonels fought until the fifth set after King’s tied the game, leading to the fifth and final set for the rivals. King’s College, started out the last set, leading 4-1 early on in the set. The Lady Colonels were not going to give it to them that easy though. The team came back to tie it up 12-12 to spark enough chance for the ultimate comeback.

Senior Alexandra Paskas has been a leader for the team on and off the court, and spoke on the team’s known rivalry between King’s College. Paskas noted, “It is the biggest game of the year. It doesn’t matter what our records are, both teams show up with a chip on their shoulder to prove to the other who is better.”

After the tying up the final set, the Colonels just could not get ahead, allowing the Lady Monarchs to finish the game with a 3-2 conference win against the Lady Colonels.

Although this season has not been the most successful for the Colonels up to this point, there is still time to overcome the conference and make it to their ultimate goal, conference playoffs.

After this loss, The Lady Colonels’ record becomes 8-12 overall, and 1-3 in the MAC Conference. Only having played four conference matches leaves them three regular season conference matches. If the Colonels pull through and take those matches they will be able to qualify for post-season match ups.

Head Coach, Joseph Czopeck, gave us some insight on how he sees the rest of the season playing out, “We have a young team. We have been going through some growing pains but that seems to be a by-product of our young team. Our team is growing at each and every practice. Our continuous growth will lead us to a positive finish to our season.”

The team began this season with only two seniors, Alexandra Paskas and Abby Sanders. The two have taken on the roles of leadership that was expected from them coming into this season. They have a passion and love for the team, and representing their university for one last time.

Outside Hitter, Alexandra Paskas reflects on the season to this point, and the hopes she has from here on out, saying, “I am torn on wanting to win, and understanding that this is team is young and not as experienced as teams in the past.”