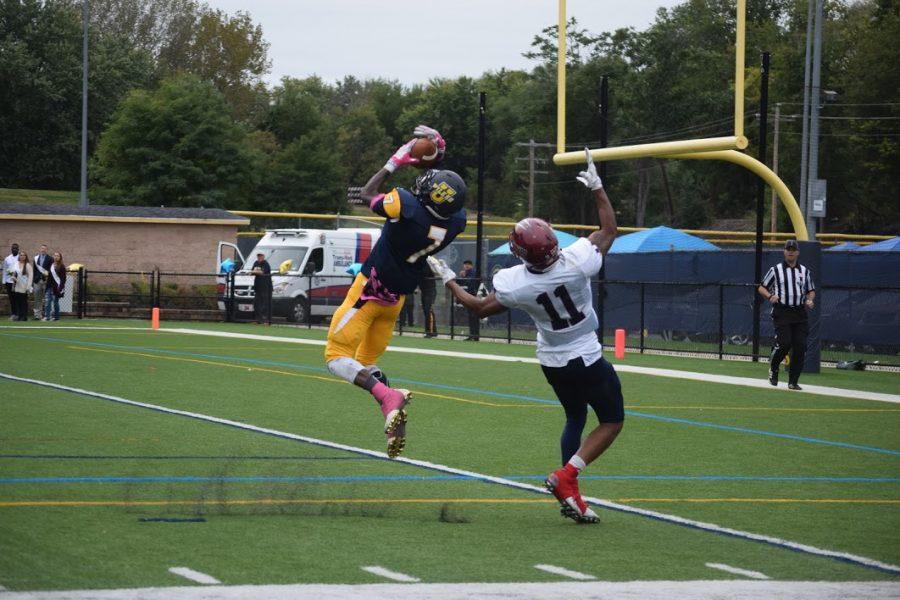 Senior defensive back (#7) Marcellus Hayes denies FDU-Florham with an interception.

Wilkes football faced a devastating loss at its homecoming game versus FDU-Florham. The game ended shortly after a touchdown by FDU, which put the team in front of Wilkes 32-28.

“We started pretty slow, which kind of set us back. However, it was still a hard fought battle until the last few seconds of the game,” said junior defensive lineman Richmond Owusua.

The stands were filled with alumni passing around photos from their years at Wilkes. “Colonel” Bob, the most enthusiastic alum, took the initiative and became the center of attention in the stands. He ran from end to end of the bleachers with his arm out-stretched, urging fans to do the wave, as well as start various chants.

It was a cloudy day, but rain held off for the entire game. The weather was predicted to rain and be very cold.

The Colonels started out very shaky. The FDU Devils took the first kick-off and pulled a surprise onside kick. It caught the Colonels off-guard and gave the possession to the Devils to start.

Only a minute later, the Devils threw a 15-yard pass for a touchdown. After the touchdown, the Devils went for a two-point conversion on the ground and failed. The score was 6-0.

Halfway through the first quarter, the Colonel’s offense was stuck in the mud. A muffed punt from the back of the end-zone set up the Devils for a 1 yard run followed by a field goal to bring the game to 13-0.

The second quarter started and the Devils quickly found the end zone again after a four-yard pass. The Devils went for another extra point but the rush failed. This brought the score to looming 19-0

The first sign of life from the Colonels came halfway through the second quarter. Quarterback Ryan Daily put together an eight-play drive for 80-yards and found tight end Garret Armstrong for a 24-yard pass to the end zone. The score was 19-7.

The Colonels side of the field rallied late in the second quarter. With only a few minutes left in the second half, the Colonels put together another drive of 80-yards after seven plays. Daily connected with Jeff Steeber for a six-yard touchdown followed by the extra point bringing the game to a close 19-14 just before halftime.

The Devils started with the ball in the second half and opened up with a 64-yard drive after seven plays. They scored after a 37-yard pass, which put the pressure on Wilkes at 26-14.

Wilkes answered the call and put a 56-yard drive together after 12 plays. Armstrong was open once again and he plowed through the defense to score a 14-yard touchdown. The game was only a touchdown away and the score was 26-21.

The Devils set up a punt with about three minutes remaining. Their punter mishandled the snap, began to run with the ball but the Colonels were there to tackle him. The ball was stripped and recovered in the end zone by Kyle Gattuso. The stands exploded with excitement and the touchdown lifted Wilkes to 28-26.

In the final minutes of the game, Wilkes drove across the field but was stopped in the red zone. They turned over the ball to the Devils.

“Colonel” Bob ran rampant through the bleachers and the stands were exploding in chants. As the crowd chanted, the Devils tore the Colonels defense apart and scored a touchdown after seven-plays for 90-yards. Only three seconds remained on the clock.

“We need to become a better team in all facets of the game,” said senior defensive back Ondre Roberts. “All of our losses, we start up slow and end up behind. This conference is too good to play catch up every week. It’s a long season left and we will bounce back. That’s a promise.”

The football team will travel to Doylestown, PA, to face Delaware Valley University next week. Next, the Colonels will face Albright College at Schmidt Stadium.