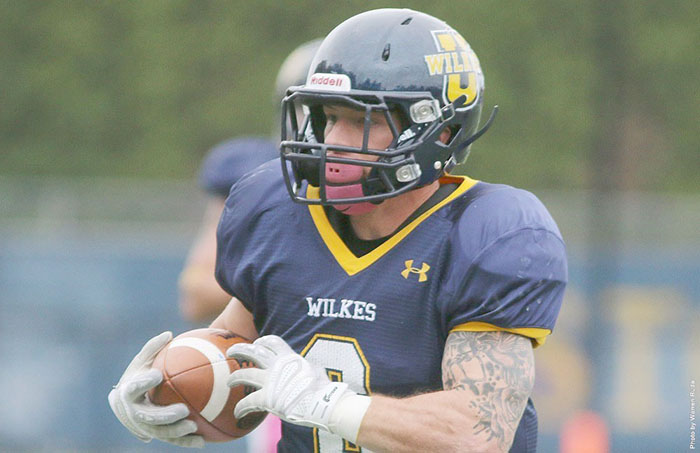 Senior William Deemer obtained the Offensive Player of the Week for the MAC.

Following a hard-earned win against Misericordia University, Wilkes fell to Widener 25-23 this past week.

Now the team is gearing up for the homecoming game against Farleigh Dickinson..

The Wilkes football team now stands 1-3, 1-1 in MAC play. The atmosphere in Schmidt Stadium will be intense this weekend when the Colonels showcase their talent for alumni, family and friends.

On Sept. 17, the Colonels took on The Misericordia Cougars at home, and got the job done with a 46-23 victory. The win instilled the confidence they will need to continue to excel as the season progresses.

Senior standout, Jake Brook talked on the big team win saying, “although we were hoping on getting our first win earlier in the season, it is still a great feeling because we’ve all been working hard since we came for camp, plus to get it against a team that beat us last year shows that we are truly getting better and moving in the direction that we want to be going in.”

As senior quarterback, Ryan Dailey, and senior receiver William Deemer led the team with nine connecting passes and leading to two touchdowns for the Colonels. While the offensive unit clearly shined all game, the defense was nothing short of impeccable. The Colonel defense held off the Misericordia offense until the third quarter, a difficult feat to accomplish and validation the squad is developing.

The defeat of Misericordia, and any team, starts Sunday every week, in preparation for game time on Saturday’s. The Colonel’s trusted in their training leading into Misericordia which transitioned into a stellar performance against the local rival on Saturday afternoon.

“We practiced well and the coaches put us in a great position to win the game. Overall we played well on offense, defense, and in the kick game which lead to the outcome that we wanted”, said Colonel’s running back Jake Brook.

Following this dominant showing by the Colonels, William Deemer was named as the Offensive Player of the Week for the Middle Atlantic Conference on Sept. 18. This award not only speaks for Deemer’s efforts as an individual, but also for the team and other 11 on the field. Several skilled players in the Middle Atlantic Conference are nominated every week, which makes it that much more notable.

Deemer dedicated this accomplishment and nomination to the rest of the team.

“I would have to say the team earned this one. I wouldn’t have been able to play as well as I did unless they did what they had to in order to set everything up that happened.”

On Sept. 24, luck changed for the Colonels, After falling behind 19-0 after one quarter, Wilkes outscored host Widener University 23-6 over the game’s final three quarters only to come up short on two final game-tying or game-winning drives.

Widener stormed out to a 19-0 lead thanks to a rushing, passing and interception return for touchdowns. After a Pride field goal pushed the advantage to 22-0 early in the second quarter, Wilkes began its comeback attempt, according to the game recap.

“Our kids have been working their tails off and we challenge them every day to control their emotions and discipline their minds to have laser-like focus because we know with the hard work they put in over the summer their hearts can take the pounding, and their minds handle the grind.” Harris stated.

The Wilkes University community is excited to welcome alumni back on campus for homecoming.

Still focused on improving one week at a time, one game at a time, the Colonels’ highly anticipated homecoming matchup against FDU is constantly in the back of their minds.

The Colonels are set to square off against the FDU Devilsat 1 p.m. on Oct.  It will be a conference matchup as both teams are fighting to compete for a bid in postseason play.

Senior Linebacker Tanner Stengel leads the Colonels’ defense with 16 solo tackles, while Junior Defensive Back Isaiah Robinson holds 12 with a pick-six under his belt. William Deemer ranks first in reaching the endzone for the Colonels with three touchdowns thus far. Senior Running Back Jake Brook stands right behind Deemer with two.

Deemer recognizes the significance of this matchup, yet it does not phase his approach as he is level headed going into the game.

“It’s a big game for this school because it’s our homecoming so I’m just going to handle it like any other game that we have and prepare the same way that I always do.” said Deemer.

Equally as collected, Brook will continue to lead the squad and bring intensity to each practice.

“Now we have a win to build on, and looking forward, we are just going to keep working hard” Brook said.