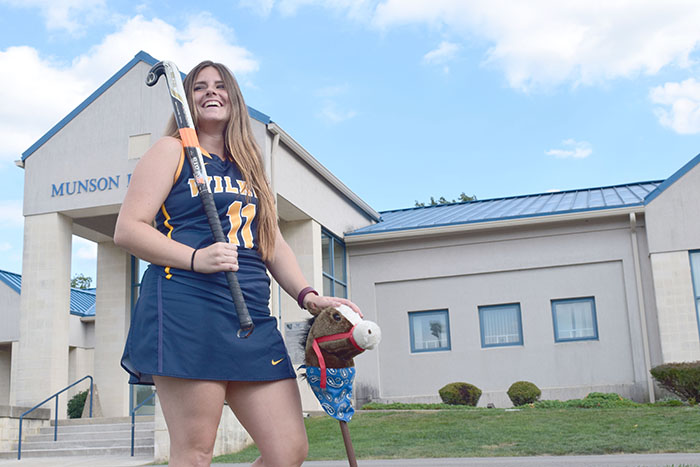 Athletic programs are always trying to have an extra edge in an attempt to win as many games as possible. For some, it is important to have some tradition or season long superstition when it comes to getting ready for game day.

For the Wilkes University Field Hockey team, they believe their stick horse’s presence puts them in a position to succeed.

The tradition began nine years ago when Head Coach Sara Myers brought the mascot in to be just that. Little did she know it would provide a motivational boost to the team.

Senior captains Maura Anistranski, Amanda Tredinnick and Taylor Ryan are responsible for delegating and relaying the importance of the stick horse to the team.

The stick horse has one of the best seats at every game. Seated on the team’s bench, the  figure has a chance to catch every goal of the season. Most importantly, it captures every hard-working moment.

Junior standout Marissa Surdy thinks the result of this tradition ends up helping the team on the scoreboard.

“People want to ride the pony so I think it motivates us to work harder out on the field,” said Surdy.

“I think that traditions are important to a team. It really helps bring us together as a team and bond over something that’s fun and different from the rest.”

Sophomore Dallas Kendra said there was a minor mishap with the team’s mascot during a recent trip to Susquehanna.

“We got to our next game (Keystone) and realized he wasn’t there,” said the netminder.

After back-tracking, the team realized the stick horse was left at their most recent game. When asked who the culprit might be for forgetting their fuzzy friend, Kendra said the team could not remember.

However, she and Amanda Thompson were tasked with making the haul to Selinsgrove to retrieve the team’s mascot.

All of the beards ranged from barely noticeable to full think like Junior Ryan Bowman’s.

Although most of the members spent the duration of the camp joining in on the fun. Bowman took it to the next level by growing his beard for an entire year.

“Some of the other guys grow beards for the season but none to the magnitude that mine is,” says Bowman.

“The runner-up, however,  might be Aaron Coyle. We are always saying how nice each other’s beards are.”

Although Coyle plays as a wide receiver for Head Coach Trey Brown’s Colonels, he found his way into the front line’s tradition.

An increasing fun competition between different positions, team members look at it as another way to bond with one another during the grueling 16 day training period.

This “fear the beard” mantra is increasingly becoming popular is sports culture and one the Colonels hope will continue on in their program for years to come.

Asked about the what he would do if someone were to shave his beard, Bowman said, “It is a tradition that I like and I don’t know what I’d be like without my beard.”

Regardless with what traditions teams choose, the Colonels hope this tradition will bring victories their way in both football and field hockey.