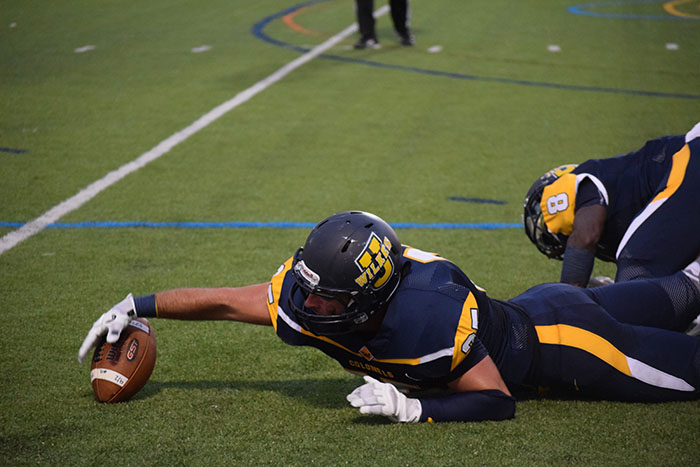 Sophomore Michael Murphy #25 dives for a loose ball in the home opener at Schmidt Stadium.

Despite a 19-point deficit at halftime, Head Coach Trey Brown managed to guide his squad for a chance to tie the game not once, but twice.

The standing room only crowd managed to make enough noise that Muhlenberg College had eight penalties throughout the course of the game.

Visiting Head Coach Mike Donnelly would be treated to his 132nd career victory to begin the Muhlenberg football season with a 1-0 record.

A 28-yard field goal from Mike Hauck would put the Colonels on the board with a 3-0 lead. Unfortunately for the Colonels, they would never again see the lead.

An early second quarter Wilkes fumble would prove to be a huge momemtum swing. The Mules put up three scores in the second quarter, taking a 22-3 lead into the locker room.

For the first time since the implementation of video review, officials had the opportunity to review a targeting penalty earlier in the game.

After an extended twenty-five minute halftime to allow for the officiating crew to look over the footage, Wilkes fans were delighted to hear the Muhlenberg player was disqualified from the remainder of the game.

Although the Colonels would be the first to score, the traveling Mules would hold on to win 29-22.

Senior Ryan Dailey excelled under the lights at Schmidt Stadium throwing for over 300 yards and two touchdowns.

Early indications in the preseason were the Colonels would run a pass heavy spread offense. They would hold true to their word by finding most of their yards through the air.

The Colonels led a fast tempo throughout the entire game but still managed to control the clock, taking nearly half of the time of possession.

The fourth quarter brought the Colonels with a chance to tie the game with under four minutes to go.

A three-and-out would force Wilkes to punt away the football in a very tough situation. The Colonels were forced to make a decision. Punt or go for it on fourth and long.

A punt could allow the Mules to run out the clock but going for it might give them even better field position.

However, the gamble would pay off as Muhlenberg would be forced to punt after their own three-and-out. The Mules’ punt would settle the Colonels deep into their own territory.

A short run by Dailey brought the stadium to their feet as fans felt Wilkes could complete the comeback. However, that excitement would be short lived as two incomplete passes would turn the ball over on downs.

Although the loss will not impact the Colonels’ standing in conference play, Wilkes drops to 0-1 overall and Muhlenberg excels to 1-0.

Wilkes has nine remaining contests in their ten game season. All of the remaining games are conference games Five of those games will be played at Schmidt Stadium, including the highly anticipated Mayor’s Cup matchup with crosstown rival King’s College.

The Wilkes Football team returns to action  in week two against Lebanon Valley College where they will open MAC Freedom play.