The Lady Colonels Volleyball team has had an up and down season so far. With seven games left on the season, the Lady Colonels have compiled a 12-17 record. The team has a 1-4 record in conference play. While many people may see this program as a below .500 team, many do not know that this team has a young core and will be a contender in the near future.

Megan Powers is facing something that she never has before- she is the only senior on the team. Although this is something she has never experienced, she has taken the challenge of leadership exceptionally well.

“It is definitely a challenge, and it puts a lot on my shoulders,” she said. “You also have to be a role model because these players are the future of the program.”

Many see this team as one who cannot make the playoffs. Coach Joseph Czopek, who is in his fourth season, does not listen to the doubter as he has expectations for this team.

“Our team preseason outlook was the earn a Conference Playoff spot,” he said. “Last season proved that it can come down to our last Conference match.”

A team that is filled with underclassmen also gives Coach Czopek a chance to watch all of these players grow as the seasons go by. He is very impressed by the performance of Sophomore Middle Hitter Ellen Mook.

“She continues to grow with each week of the season,” Czopek said. “Ellen has improved 100% since last season and she makes us a better middle-oriented team, which makes us successful,” said Megan Powers.

Transfer Junior Outside Hitter Kayley Schinski, has started to find her groove on the team since not playing the game since high school. Schinski and Mook look like they can be future leaders for the Lady Colonels.

“There aren’t any drills in practice that can compare to competition court time,” he explains. “Experience playing at the college level for our young team will pay dividends as the volleyball program continues to grow.” 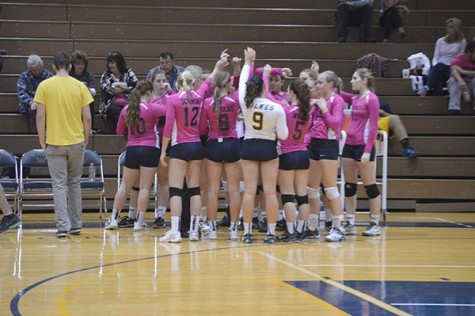