Violence in sports: how aggression plays out on the field 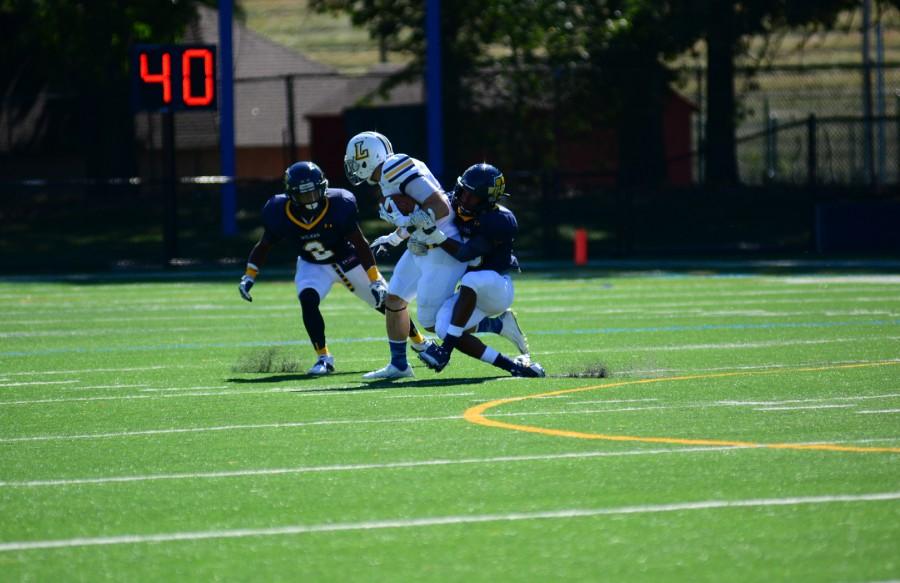 Violence is a swift and intense force that occurs in almost every sport. It can vary from a serious injury to unsportsmanlike conduct, but it is a part of sports that cannot be avoided.

This causes fear in athletes and those close to them. Many people do not join sports to avoid violence. On the other hand, recovery from an injury can increase players respect for one another.

Through interviews with freshman athletes living in Evan’s Hall, the large freshman dorm on campus, almost every one of them could recall a time in which they witnessed, were a part of, or a victim of violence in sports.

Two of the students recalled a time that wrestling was violent. One, Morgan Fuller, entered a summer wrestling tournament with his team.

One of his teammates entered a match and accidently broke his opponent’s ankle, enraging the team and leading to his teammates wrestling with unsportsmanlike intentions.

Morgan’s teammate entered the violent match, and was wrestled in a horrible way. Halfway through the match, the opponent threw a punch at his face, ending the match. The other student who witnessed violence in wrestling, Kaitlin Yurko, is very interested and is a regular spectator of the sport.

Once while watching a match, she witnessed an upset wrestler abuse the rules. In one of the final elimination tournaments of the season, the wrestler became so upset at the fact that he might be eliminated, he decided to inflict pain on his opponent. He tossed his opponent above his head to his neck leaving the opponent unconscious, and later carried out to an ambulance.

Derek Hunt, a soccer fan and player, witnessed a very unsportsmanlike event. When watching a high school game, a frustrated player took a shot at the goal that was then caught by the goalie.

The frustrated player then ran straight into the goalie, attempting to knock him over. A fight between the two of them, and escalated to a brawl between both teams. The referee red carded the initial player, and then ended the game immediately.

Josh Landsger, a basketball player, was also on a team that was affected by violence. His high school basketball team was winning against another team when one teammate decided to make a move on his opponent, and scored over him.

His opponent was enraged and embarrassed, and he decided to swing his elbow at Josh’s teammate’s head. His teammate was knocked unconscious, and carried off in an ambulance. He suffered an injury to his ear which still affects his hearing today and was out for half of his basketball season. This ended his basketball career.

Grace Sanzalone, a softball player, suffered multiple injuries in her career. When she competed during her regular season, she tore the labrum, a ligament located in the arm that is required for the simplest movements.

She was slowly recovering, but was invited to a national tournament she did not want to pass up on. She entered the tournament and reinjured herself, along with fraying her rotator cuff. She had to go through surgery to fix her arm. After over a year of recovery, she started back up and suffered yet another injury.

Recently, she went to field a softball and after it took a bad bounce, and it hit her in the head. She suffered from a broken nose and a concussion.

Kyle Stearley, a football player, witnessed an injury at a college practice. During the practice, one player accidentally collided into the side of another, causing a third person to get into a harsh helmet-to-helmet collision. Kyle’s teammate stopped practicing early, after being unconscious for a short period of time, He recovered within a few weeks, but the incident frightened the team.

Unfortunately, violence is a part of many organized sports. Many sports do all that they can to control violence.

Sports and other athletic activities demands a large amount of respect towards each other. Respect all athletes for the work they do, and hopefully violence will decrease in organized sports.