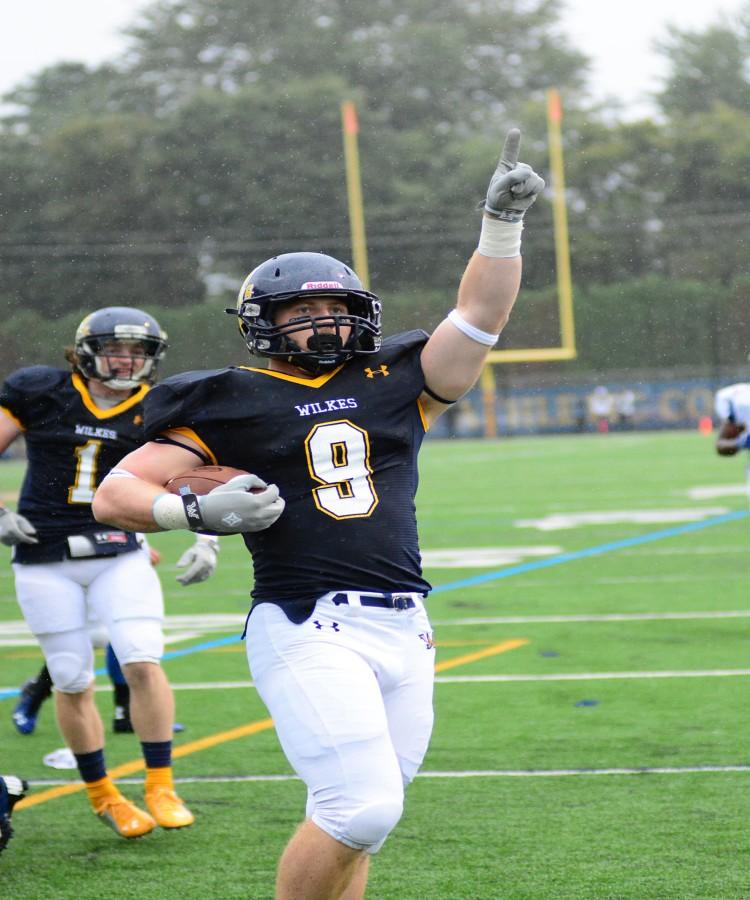 The Colonels’ football team opened its season with a disappointing loss to the Muhlenberg Mules. However Saturday’s game brought Coach Trey Brown his first win and high hopes for the remainder of the season.

Marcus Leaf (#4) plays safety for the Colonels. He is proud to say that “the team’s energy so far is positive, and they are a family.”

Leaf gets amped during the pregame speeches, but his adrenaline rush kicks in when he is coming down the stairs approaching the field.

Last week against the Mules he felt that played well covering receivers, but thinks that he can improve on communicating with the rest of his defense on the field.

“Do your one job of 11, and be the best athlete on the field,” said Leaf when describing his view of the game.

He was confident the team would bounce back and overcome the Misericordia Cougars with a win.

Coach Brown was impressed with the attitude of the team during the game.

He was also pleased that the team played with excitement, but wishes for more cheer from his sideline.

Brown thinks a huge part of the loss was due to ‘self-inflicting wounds.’ He describes these wounds as penalties, turnovers, and mental mistakes. He thinks that if the team limited these they would have made it a closer game.

Coach Brown and the rest of the team were ready for the Cougars because theywere able to watch film on them unlike they were able to do with Muhlenberg, since they had not played yet.

Like Wilkes, Misericordiaalso came off a tough loss. Last week Misericordia was defeated 55-0 to Utica College at home.

Last year, the game against Misericordia went well as Wilkes was able to score 33 points on its way to a 33-14 win.

Running back P.J Incremona rushed for 43 yards and two touchdows while teammate Ryan Behrmann rushed for 49 yards and a touchdown. As a team Wilkes went on to rush for 155 yards.

The Colonels defense did well in limiting Misericordia to scoring seven points as running back Jeff Puckett would go on to rush for 167 yards and a touchdown. Leading the way for Wilkes on defense was middle linebacker Michael Condrad who would have 11 tackles during the game. Linebacker Nick Gray would have the teams lone sack while finsihing the game with seven tackles.

Junior Bryan Mellon averaged 34.5 yards per punt including a 41 yard punt that helped pin the Cougars deep in their own territory.

Up next for the Colonels is a matchup with Lycoming College at 1 p.m. on Saturday. Immediately before kickoff, lettermen and letterwomen will be recognized on the field.

The Colonels responded with a big time win against the Cougars, winning 41-7 in a game that was not played under the best conditions.

The rain did not impact quarterback Ryan Dailey as he went on to complete eight passes for 212 yards and three touchdowns. With one of those being to senior Tim Bousson, who leaped up to catch one from Dailey for the first score of the game.

Receiver William Deemer was the colonels leading receiver with two catches for 85 yards including a 67 yard reception.

Tight ends Jeremy Hartman and Drew Devitt each caiught a touchdown while they went on combine for 110 yards receving.