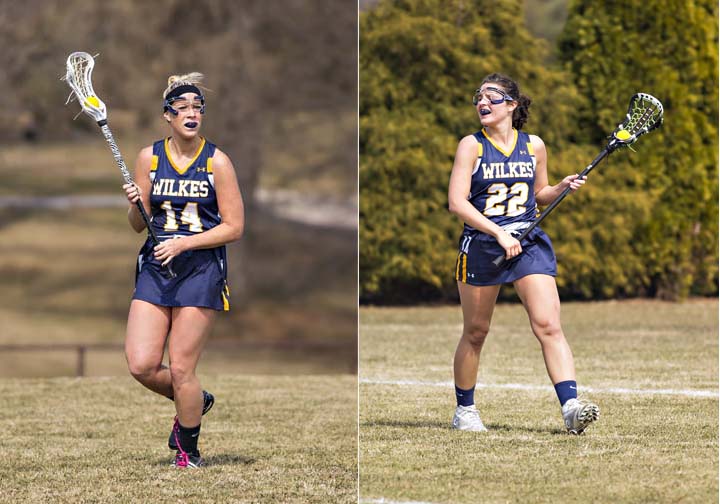 Pictured far left is sophomore Tori Kerr, On the right is senior Gabby Ford looking to pass the ball to a teammate.

A slow start for the Wilkes University Lady Colonels women’s lacrosse team came back to bite them in their first loss of the season to FDU-Florham, 16-13.

FDU-Florham got on the board quickly by scoring three goals in the first five minutes of the off to create a 3-0 margin. Wilkes responded quickly by adding two quick goals in less than a minute from sophomore Madeleine Brownsey and senior Gabby Ford.

FDU-Florham answered quickly, extending the margin back to three with two more goals by Joelle Manganella.
The Lady Colonels points leader, Carley Smith, took matters into her own hands and continued her great season by adding a goal to pull the Lady Colonels to within two.

However, FDU-Florham responded with two more goals to boost the lead to 7-3. Never quitting, Gabby Ford hit Sara Gilbert with a pass to make the score 7-4.

Once again, FDU-Florham continued to keep the bleeding going by adding two more goals to extend the lead to their largest of the game by a score of 9-4 before Ford added her second goal of the game right before the buzzer with 5 seconds left in the first half.

Down 9-5 to start the second half, the Lady Colonels took the second half by storm, scoring five consecutive goals to take the lead 10-9. Two of them came from sophomore Tori Kerr, and the three others came from Ford, Gilbert and Brownsey.

Unfortunately for the Lady Colonels, FDU-Florham never gave in. They responded to this run by answering with four goals, regaining a three-goal lead 13-10.

Smith and the Lady Colonels wouldn’t give in. She pushed right back with two more goals to bring the margin back down to one.  FDU-Florham once again closed the door on the Lady Colonels tossing in three more goals responding to Smith’s flurry to give them a  four-goal lead with just four minutes remaining.

“I don’t think we took the game serious enough until we were down in the first half,” the junior stand out said. “We got outplayed and made a lot of mistakes that allowed them to score. We can’t have any more slow starts and we need to play the full 60 minutes.”

With three minutes left, Brownsey scored yet again on an assist coming from Smith.  However, it was too little too late for the Lady Colonels as they fell to FDU-Florham by a score of 16-13.