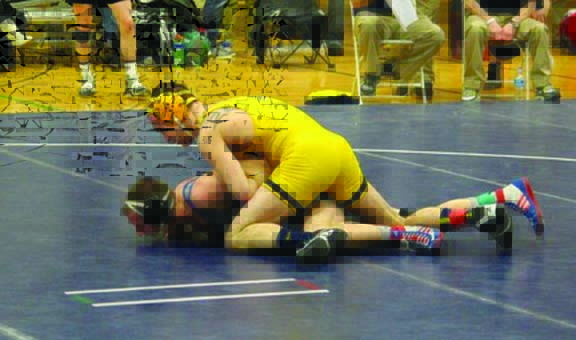 As the 2013-14 college-wrestling season wound down, it all came down to the 2014 Division III NCAA National Wrestling Championships this past weekend in Cedar Rapids, Iowa.

Redshirt junior 149-pounder Mark Hartenstine was the only Colonel to come home with a podium finish and All-American status. He finished fourth and was the sixth consecutive All-American for Wilkes.

In the opening round of the tournament No. 3 seeded Mark Hartenstine handled Ryan Seidler of Wisconsin-Eau Claire by a decision 7-1.

In the quarterfinals, Hartenstine would face Jacob Long of Concordia-Moorhead and in a very tough match Hartenstine came away with a decision score victory of 1-0.

Winning in the quarterfinals secured Hartenstine a place no lower than sixth on the podium.

Hartenstine had a tough match in the semifinals facing off with undefeated No. 2-seeded Ryan Prater of Elmhurst.

Prater handed Hartenstine his first loss of the tournament and won by fall in the time of 5:26.

In the semifinals of wrestle-backs Hartenstine took on Elroy Perkin of Wisconsin-Whitewater. Hartenstine notched his third tournament victory by a dominating decision score of 13-9.

In the wrestle-back finals, Hartenstine faced off against rival Vincent Fava of Delaware Valley College.

Hartenstine had faced Fava two weeks earlier in the semifinals of the East Regional tournament, where Hartenstine came out on top of that one 3-2.

This time it was Fava who got the victory and third place by a 3-1 decision.

Hartenstine ended the tournament with a fourth place finish and All-American status.

Senior 133-pounder Myzar Mendoza opened the NCAA tournament with a 10-1 major decision over Nathaniel Giorgio of the Coast Guard.

In the quarterfinals Mendoza took on No. 1 seeded Kenny Anderson of Wartburg and in a hard fought 2-1 decision Anderson came out on top handing Mendoza his first loss of the tournament.

Friday night in bout 208 Mendoza would look to keep his podium hopes alive against No. 7 seeded Silas Murray of Rhode Island College. After a 9-2 decision Mendoza was handed his second and final loss of the tournament.

Mendoza finishes his college-wrestling career with a record of 109 wins and 32 losses.

Facing off against the No. 1 seeded Nazar Kulchytskyy of Wisconsin-Oshkosh. The match did not go Krawchuk’s way and Nazar topped Krawchuk by a major decision score of 18-4.

In wrestle-backs, Krawchuk would look to get his first win of the tournament against Steven DeWitt of Loras. But DeWitt got the decision victory, 9-4. Krawchuk ends his college career with a record of 80-30 and All-American honors his junior season.

In a hard-fought match Diesel would drop to wrestle-backs as Williams won by decision score of 5-1. In bout 145 Diesel would pick up his first win over William Hermann of Elizabethtown by a score of 4-2.

Only needing one more win to get on the podium, Diesel took on No. 2-seeded Ethan Ball of Coe, and in a very tough match Ball came out on top with a decision score of 2-1 and knocking Diesel out of the tournament.

Diesel finished the season with a record of 25 wins and 14 losses.

Junior 197-pounder Eric Bach opened the tournament with Donnie Horner of Coe. Coe came out on top with a major decision score of 14-4.

In wrestle backs Bach faced Ursinus’s Christian Psomas, Bach was again defeated by a major decision score of 12-3. Bach brings his season to a close with a record of 18 wins and 10 losses.

Senior 285-pounder William Fletcher returned to nationals with hopes of getting on the podium. He would face off against St. Olaf’s Zack Gibson. Gibson won by a decision score of 4-0.

In Fletcher’s last match of his career, he took on Corey Becker of Coe College and In a gut-wrenching match Fletcher fell short and lost 3-1 in sudden victory.

Fletcher ends his college-wrestling career with a record of 65 wins and 40 losses.