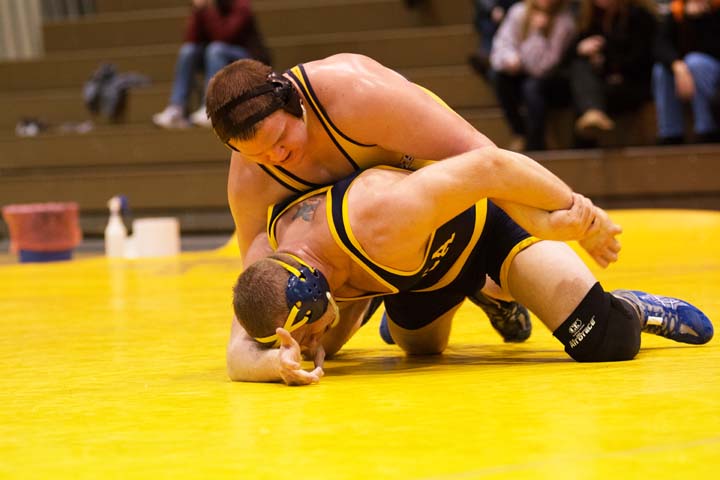 The Wilkes University men’s wrestling team has been surrounded with awards and championships over the course of the program’s history.

However, the most recent accolade is one that reflects every single wrestler who has ever been part of a victory at Wilkes.

With a victory against Ithaca Feb. 14, the Wilkes Colonels wrestling team posted its 800th victory in the school’s history. It is the 12th program in any division of NCAA collegiate sports to get to this mark and only the second team in Division III history to have more than 800 victories, following only Springfield College in Massachusetts.

This win gave the Colonels a mark of 800-369-16. The program has existed for about 68 years now and has won almost 70 percent of its matches over the course of those years.

For the Colonels, this win is just icing on the cake to a season in which they have a solid record of 17-3 and are ranked No. 9 in the country.

Head Coach Jon Laudenslager has been part of this program in many different ways. Not only is he the head man of this great program, he is a former standout wrestler for the Colonels earning four varsity letters from 1994 to 1998 while wrestling at the Division I level.

While at Wilkes he was named Eastern Intercollegiate Wrestling Association Rookie of the Year honors as a freshman, the Shawn Galbreath Academic Coaches Award as a junior and the Timmy Adams Most Courageous Performer Award.

“To be only the 11th team in NCAA History to eclipse the 800 win mark says a lot to the commitment our athletes have made over the years,” Laudenslager said. “I am very fortunate to have the opportunity to continue coaching here where I competed as well.

“The traditions and foundation we have in place have all been filtered down from Coach (John) Reese to Coach (Alan) Zellner and on to me,” the coach said. “The core values of hard work, commitment, and having a strong desire to be successful on and off the mat is why these young men keep having success.”

One of the wrestlers possessing that desire to be successful on and off the mat is junior heavyweight Nick Dawson. Dawson succeeds in the classroom and community, as well as on the mat. He is 20-9 on the season, won the Will Abele Invitational and came in second at the Next Man In Nationals.

“We just hold ourselves to a high standard and you are reminded of that every day you step in the room,” the junior said. “Everyone knows that every practice, lift and run that we do is going to be a battle and we’re stronger when we step out on the mat because of it. It was a great feeling to reach that milestone as a program, especially against a good program like Ithaca. However, reaching that milestone is more about the guys who came before us than it is about us.”

The Colonels have plenty of wrestlers looking to go far and hopefully qualify for nationals. MAC champions Mark Hartenstine (No. 5 in the country 33-1) and Kris Krawchuk could have a good chance to go far as well as nationally ranked sophomore Guesseppe Rea who finished second in the MAC Championships.

The Colonels took wins in nine of 10 bouts including three extra point victories Thursday night at the Marts Center.

The Colonels begin the East Regional at King’s College March 2.