Getting to know … Steve Stravinski 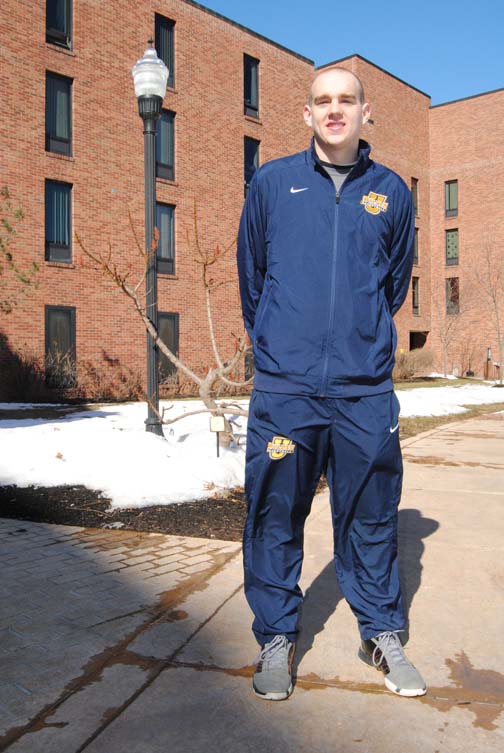 Steve Stravinski is a sophomore basketball player for the men’s basketball team and a recently declared psychology major. Stravinski played in high school for the Pittston Area Patriots and won multiple honors in his time there, including lettering his final two years, being named to the all-star teams in both the Citizens’ Voice and the Times Leader, as well as being named to the first team ALL-WVC team and leading the conference in scoring his senior year, averaging 17.8 points per game.

Do you have any set pregame ritual you have to do before you start a game?

Not really, I just shoot a lot of threes.

So you don’t have to listen to music or anything?

When you do have it, is there a set playlist you listen to?

Do you have any players you idolize or try to emulate?

Yeah, one of my big ones is Chandler Parsons on the Rockets because he’s from Florida and I’m a Florida fan, so I love Chandler Parsons. Also Goran Dragic, he’s on the Phoenix Suns, I’m a huge fan of him too.

After a game, do you have something that you have to do so that you can like decompress, whether it is a win or a loss?

Yeah, like after the game it is weird because I can never eat. Its weird because I just don’t have an appetite for an hour or two after a game, whether it is a win or a loss. Win or lose, it is just something that has always been, it’s weird but that’s what happens.

Do you think it is a mental thing or are you just too excited and can’t do it?

It might be both. It’s just I’ve never had an appetite after a game.

Do you drink anything when you are playing? Are you a Gatorade or a water person?

I like Gatorade but the last two seasons its just been water because the trainers just bring water over, so just water for now.

You already said your favorite college team is Florida, but do you have a set pro team that you like?

Not really, I was originally a Kings fan when Mike Bibby and Chris Webber and Peja Stojakovic all them were played there back in 2000, so that was my team but since Chandler Parsons is on the Rockets. I’d just rather follow the players rather than the teams because the NBA is just different. I don’t know how to explain it but there isn’t much team loyalty. So it is just better to follow players.

Do you prefer the NCAA format to the NBA?

Do you feel the tournament raises the intensity around it?

The NCAA, yeah definitely, there is more intensity. It just has everybody, the crowd is into it, it is just awesome, like the intensity on the court.

Have you ever felt like a high school game or a Wilkes game match that kind of intensity?

What is your favorite part of the season?

So of all the awards you won before coming to Wilkes, which one are you most proud of?