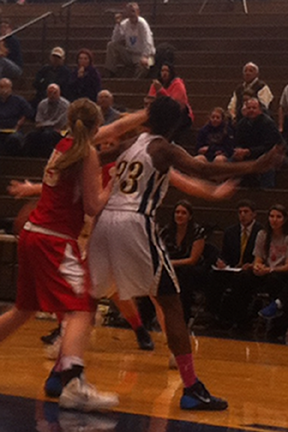 With the win the Lady Colonels finish the regular season with an overall record of 6-19, and finishing 3-11 in the Freedom Conference.

Both teams saw similar struggles in seeing the ball go through the hoop, combining for only 13 made field goals in the first half. However, the second half was a different story as King’s opened up with two straight three pointers but the Lady Colonels fought back to tie the game at 33 with just over 10 minutes to go in the game.

Either team failed to score in the last minute which sent the game into overtime. Junior Elena Stambone got overtime started with a layup of her own and Wilkes held a two point advantage until King’s tied the game up with free throws.

Another junior, Chelsea Brown, connected on a jumper that put the Lady Colonels up 50-48; however King’s answered on the next possession with a layup to knot the game up once again at 50-50.

With just over two minutes left in overtime, senior center, Ellen Rich hit what would be the eventual game winning jump shot. Rich finished with a double-double, 11 points and 16 rebounds, while Chelsea Brown enjoyed a fine game collecting 13 points and grabbing another 16 rebounds for the Lady Colonels.

Head Coach Christopher Heery said: “I was very excited for the girls who worked so hard this year. We had a lot of games that came down to the wire. It was nice to get that win. It will help us spring into next season.”