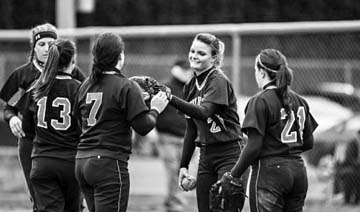 The Lady Colonels will be taking to the softball field again when the season opens later this month with a tournament at Virginia Beach.

It’s almost that time of year again. The Wilkes University softball team is gearing up to kick off the 2014 season. After ending last year’s season with a record of 17-23, Wilkes hopes to make this season even better.

The women will be kicking off their season Feb. 28, when they head down to Virginia Beach. In Virginia they will start their season with a tournament of five games.

From there the following weekend they will be traveling to Salisbury, Md., where they will play in another tournament. The home season opener for Wilkes will be March 12 against The University of Scranton.

“I am really excited for this upcoming season because we seem to be improving more and more each year,” says junior Mandy Seccia.

“We are all ready to work hard at practices and continue to improve each day. We hope our hard work will pay off during the season and we will win consistently. I am most looking forward to our rival game against Kings because even though they will be a tough team to beat, I think we will be very competitive with them.”

Not only are these women great athletes on the field they are great students off the field. Four Players were named NFCA Scholar-Athletes for their academic performance during the 2012-2013 school years.

Alysha Bixler, Emily McGrath, Haylie Phillips and Kait Brown were the four student athletes to receive this honor. Three of the four were named to the Middle Atlantic Conference Honor Roll as Phillips was not eligible as a freshman.

Wilkes looks to return to the Freedom Conference tournament in 2014 following a four-year absence from the postseason event.